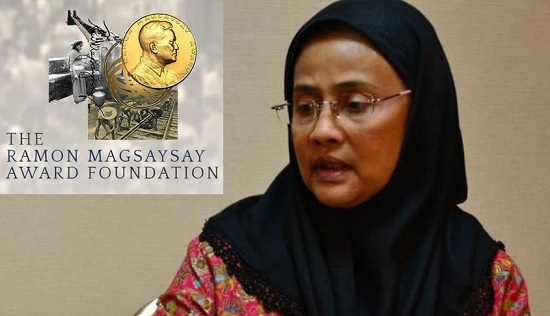 Angkhana Neelaphaijit, a former member of the National Human Rights Commission (NHRC), has been awarded the 2019 Ramon Magsaysay Award for “championing justice, case after painful case”. She is among five individuals who will be receiving the award in Manila on September 9.

The other winners are Myanmar journalist Ko Swe Win, who is being awarded for “building the quality and force of media's truth-telling”; Filipino musician Raymundo Pujante Cayabyab, who is praised for “nurturing the gift and unifying power of music”; Indian journalist and TV anchor Ravish Kumar who is praised for "harnessing journalism to give voice to the voiceless"; and South Korean activist Kim Jong-ki who is praised for "stemming the destructive tide of youth violence".

Angkhana was recognised for her unwavering courage in seeking justice for her husband – noted human-rights lawyer Somchai Neelapaijit who was abducted in Bangkok in 2004 after he publicly accused the military of torturing detainees in the restive deep South – and many other victims of violence and conflict in the predominantly Muslim region. She is also being awarded for her unflagging work to reform a flawed and unfair legal system, and for proving that an ordinary person can make a national impact.

The Justice for Peace Foundation (JPF), a network of human-rights and peace advocates that was founded by Angkhana in 2006, has also done important work in documenting the human-rights situation in the deep South, raising public awareness and pressuring the government to act on human-rights cases, providing legal assistance to victims, and training women on human rights and the peace process, the award citation said.

In a vital initiative, JPF and other groups are pushing for laws that will criminalise torture and enforced disappearances (the current Thai law only recognises murder if the body is found). Their steadfast lobbying succeeded in getting Thailand to sign and ratify the United Nations Convention against Torture in 2007, and the Convention to Protect All Persons from Enforced Disappearance in 2012 – already major victories even though the rules have yet to be implemented, the citation said.

The news of honour came just days after Angkhana and fellow NHRC member Tuanjai Deetes had earlier this week resigned from the agency before their terms were due to end over concerns that a change in the NHRC procedures would restrict the ways they could help vulnerable people.