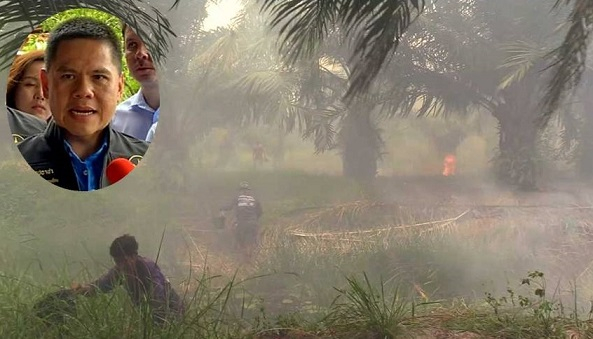 Natural Resources Minister Warawuth Silpa-archa on Tuesday revealed a plan to have the Department of National Parks, Wildlife and Plant Conservation (DNP) use heat-detecting drones as a measure for forest fire prevention, while also urging the Thai public to help watch out for and alert the authorities to fire-risk spots.

Prior to joining the Cabinet meeting at Government House, Warawuth spoke to reporters about the wildfires that were engulfing the Khuan Khreng peat forest in Nakhon Si Thammarat province.

He said farming activities around the peat forest had caused rapid decline of the water table, a condition that made the landscape vulnerable to fires stemming from geothermal (underground) accumulation in soil layers that erupt into flames, or an ill-intention person's deliberate fire-lighting.

So far the Royal Forestry Department's forest-fire control centre had received good co-operation from various parties to fight the huge fire in the southern province, he said.

The fire's ground zero was impossible to access by fire-fighters, and hoses were not long enough to reach the inner area. That led the Army to send in helicopters to aid the mission and the ministry to ask for drones to enable better observation, more water hoses and face masks for the protection of fire-fighting volunteers, according to Warawuth.

The minister also said he had instructed the DNP director-general to find the budget to procure drones for the agency's regular use, in order to save time and enable wider coverage and effectiveness of forest patrols.

The drones – preferably with 6-8 propellers each to allow for a longer-flight to cover more areas – would be equipped with heat-detecting cameras to scan for fire-risk spots, he said. Drone use would be helpful to the task, which was currently performed via satellite imagery that yielded only one result daily.