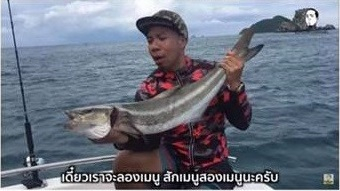 By Prasit Leelahakhunakorn
The Nation

YouTube show host Poomjai “DJ Poom” Tangsanga and six other people have been called to a meeting with a police investigator at the Pak Nam Chumphon Police Station in Chumphon’s Muang district next week.

The group were ready to testify now, but the appointment was timed for next week so that the Phaya Sua task force representative, who filed the police complaint on Tuesday, would be free from working on another time-consuming mission, said the officer.

The representative has alleged that Poomjai fished near Koh Raed, Koh Kalokm Koh Lak Ngam and Koh Lava within the park territory.