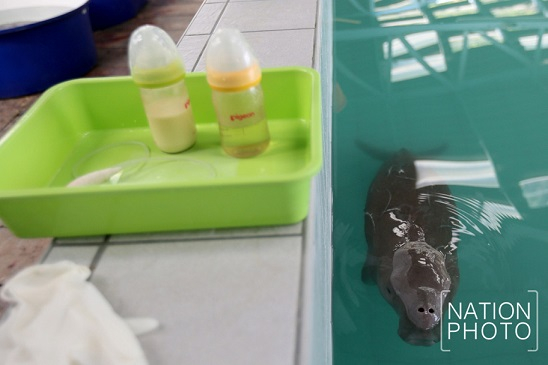 Baby dugong Yameel, a rescued orphan, may be raised in an aquarium if it were found to be unable to stay on its own in the sea, Dr Nantarika Chansue, the head of the Veterinary Medical Aquatic Animal Research Centre at Chulalongkorn University, said on Sunday.

Nantarika said the Thai officials' experience of raising dugong Mariam, who died on Saturday, had led to the realisation that leaving orphaned baby marine animals in the wild might not be as safe as people think, due to the pollution and garbage. Mariam had been kept in the open in a natural environment but she died on Saturday in a nursery tank on land after her infection was aggravated by pieces of plastic lining her stomach.

Nursing Mariam had also given veterinarians lessons in how to treat and give medication to a dugong, including taking blood samples, feeding and ensuring an environment free from garbage for the animal's safety, she said. Such lessons were valuable for the care of the other dugong baby, Yameel, in Phuket, Nantarika said.

She said Yameel was being kept in a closed pond, which could be expanded for his comfort, under the care of the Department of Marine and Coastal Resources and related agencies. She said officials could release Yameel into the seas, as expected by many people, once he is weaned off milk as there is no milk in the sea. Even after being releasing into the sea, officials would maintain some kind of supervision because if Yameel cannot live on his own in the natural environment, he might be brought back to be raised in an aquarium like in other countries.