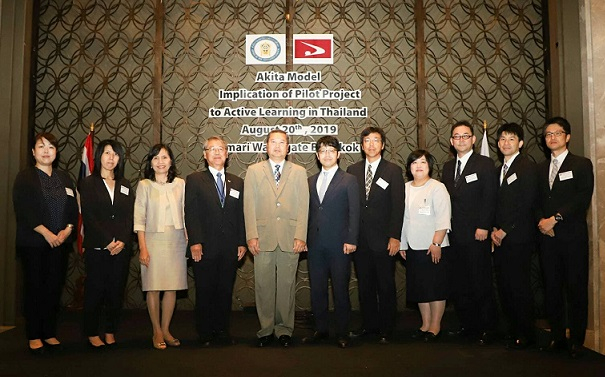 The Office of the Education Council held a meeting today (August 20) to assess the trial of using the "Akita Model" at four pilot schools in Bangkok and Nonthaburi, in line with the government's policy to promote active learning among Thai students.

Use of the Akita Model, now in its third consecutive year, was implemented under a collaboration between the Education Council, Dhurakij Pundit University, and Japan's Akita Prefecture Education Board, said Education Council secretary-general Supat Jampathong.

Starting in mid-2017, the model - which helped students at Akita schools to obtain high scores in the Programme for International Student Assessment (PISA) and better results in the provincial student quality assessment - was applied in classroom activities at four pilot schools in Thailand (Ratchamontri School and Khlong Pittayalongkorn School in Bangkok as well as Pracha Uppathum School and Benjamarachanusorn School in Nonthaburi).

The model lifted the active learning atmosphere in the classrooms with teachers encouraging questions and answer-finding attempts by groups or individual as well as hands-on practices.

Boosting students' learning via active interacting and conversations, the model emphasises on four aspects: 1 the ability to raise notices in learning; 2 the ability to form original thought; 3 the class discussion in pair or in group; and 4 the review of lessons.

Pracha Uppathum School director Panita Usaipan said the school started applying the Akita Model for science and math under the concept of "notice, think, discuss and review" with Prathom 1 pupils in June 2017, before covering all eight core subjects.

The school's current students, taught under the Akita Model, have shown good academic performance and their scores in the national test in academic year 2018 also showed great improvements in the areas of language, calculation and rationalisation, she said. There were positive feedback from the teachers as they became more inclined to brainstorm and design the learning contents, she added.