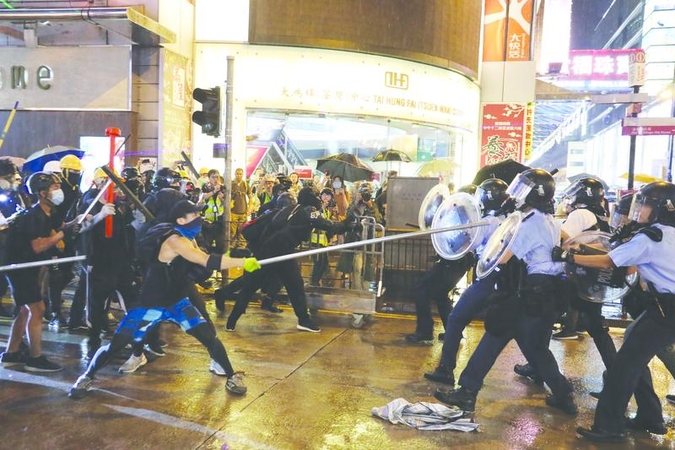 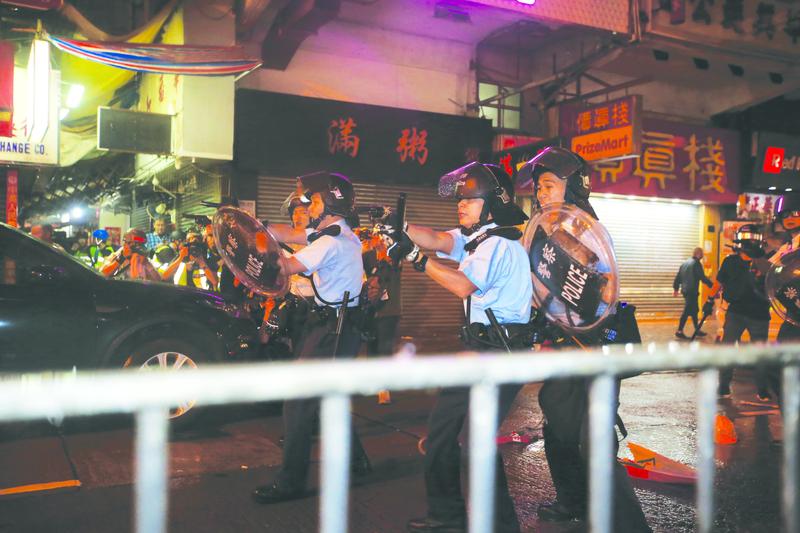 Appalling acts of  violence over the weekend are pushing Hong Kong toward an “extremely dangerous situation”, the SAR government said in a statement released early Monday.

The government urged the people of Hong Kong to pull together in the battle against violence and help restore peace and order. 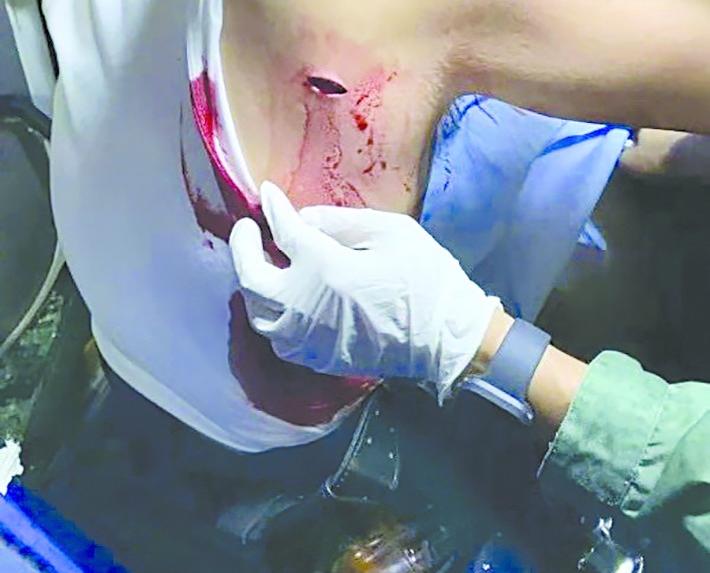 Hong Kong  saw a surge in violence on Sunday as radical protesters clashed with police in the normally quiet district of Tsuen Wan in the New Territories, hurling gasoline bombs and setting fires on the streets on the 12th consecutive weekend of demonstrations.

Several police officers were injured in the clashes  which Police Commissioner Stephen Lo Wai-chung condemned as “reckless, violent and unlawful” acts by rioters who indiscriminately attacked officers with metal rods and wooden poles, forcing an officer to fire his gun into the air as a warning.

Thousands of demonstrators marched in Tsuen Wan, on Sunday with a radical group breaking away from the relatively peaceful assembly and setting up barricades on major roads in the district, using bamboo poles, traffic cones and metal railings to paralyze traffic. Subway operator MTR Corp was forced to shut down several stations on the busy Kwun Tong Line.

About 10 roads in the area were closed and more than 70 bus routes had to be suspended or diverted.

The protesters hurled gasoline bombs and bricks at police officers, and pointed laser beams at them. After repeated warnings, riot police fired volleys of tear gas, and used minimum force to disperse the protesters after 5pm.

A China Daily photographer’s camera lens was broken by a brick thrown by protesters during the confrontation, which ended when the crowd gradually dispersed after 7 pm. Several protesters were arrested.

Sunday’s violence came on the heels of another violent day on Saturday in three other districts of Kowloon. Although public transport services slowly returned to normal in the eastern Kowloon district of Kwun Tong on Sunday, the scars of the previous day’s street clashes remained.

Railway service at various stations resumed along the Kwun Tong Line, including Kwun Tong, Ngau Tau Kok and Kowloon Bay stations, and most local stores reopened. Black, abusive graffiti scrawled on roads and walls of buildings were a grim reminder of the previous day’s violence.

In Kowloon Bay, which was the scene of fierce clashes between demonstrators and police on Saturday, a sea of refuse left by protesters, including broken umbrellas and dismantled barricades, had been cleared up by workers and piled up on roadsides.

Some of the “smart” lampposts vandalized on Saturday were being protected with traffic cones. Black-clad, masked protesters had sawed off the new lampposts, which city officials said costs about HK$140,000 ($17,850) each.

Residents were enraged by the latest violent acts. A security guard at a building on Tai Yip Street — the scene of violent rioting on Saturday — said the building and some nearby shops and garages were closed on Saturday, and some remained closed on Sunday.

“Some protesters put up roadblocks with metal barricades and bamboo poles on the streets, and we had to pull down the shutters for safety,” the guard said.

In Kowloon Bay, Tso Tat-ming, a 60-year-old taxi driver, denounced radical protesters who resorted to violence to force the government to meet their demands.

He lamented that not only his business had suffered but also retail and tourism industries were badly hit. Tso said he had been earning about HK$5,000 to HK$6,000 less monthly recently.

“Some residents are scared seeing the protesters blocking main roads and tunnels with their guerilla-style tactics,” he said.