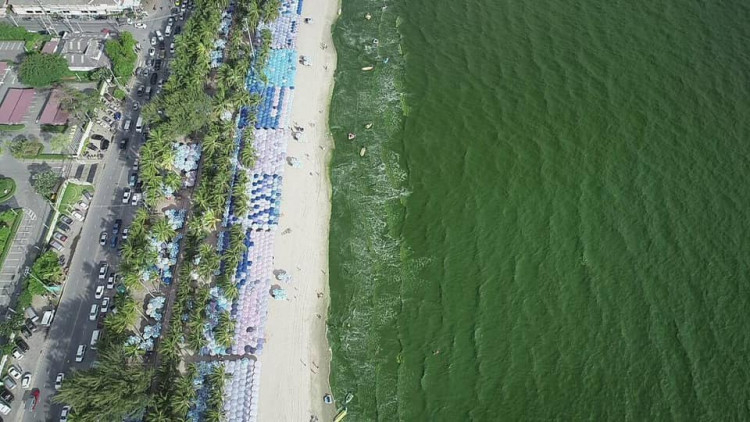 The sea off the popular Bang Saen beach near Bangkok has turned green because of a a phenomenon known as a plankton bloom but is expected to return to normal in a few days, the mayor of the Saensuk Municipality explained.

Narongchai Khunpluem, mayor of Tambon Saensuk Municipalty, posted on his Facebook wall that the sea off Bang Saen Beach has been green since August 19 because of the plankton bloom, which occurs when sunlight and nutrients are readily available to the plants, and they grow and reproduce to a point where they are so dense that their presence changes the color of the water in which they live

He said the sea has plenty of plankton of the Noctiluca species and the chlorophyll in the planktons turned the sea green.

Narongchai said the plankton was harmless and emitted no toxic substance but did give the sea a strong smell because of the ammonia in their cells.

He added that a lot of small fish had died because when the plankton died, they were digested by bacteria and the process reduced oxygen in the water.

This year the plankton bloom phenomenon has occurred four times in February, March, July and again this month, the mayor added.