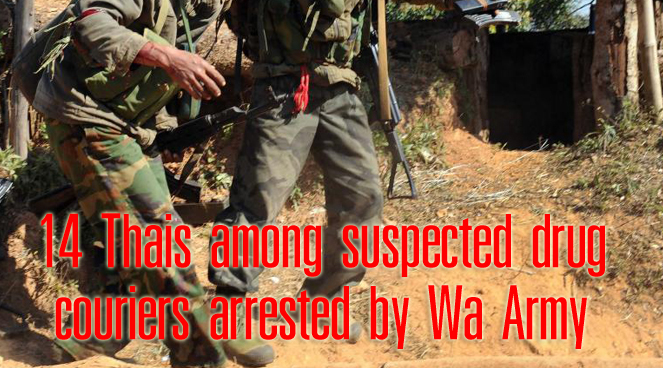 Fourteen Thais are among 36 suspected armed drug couriers arrested by the United Wa State Army across the border with Chiang Mai’s Mae Ai district, Thai authorities have been informed.

The UWSA in the Myanmar border town of Yon arrested 14 Thais and 22 Myanmar suspects on Tuesday after a group of armed drug couriers clashed with the Thai authorities in the forest behind Oko village in Tambon Tha Ton of Mae Ai district.

The suspects were detained at the UWSA base in Yon.

The Thai authorities checked with the UWSA and found nine of the suspects were wanted under a Thai court warrant for murdering anti-drug activist, Supoj Pulee, 29, at his house in Moo 19 in Tambon Pa Tuen of Chiang Rai’s Mae Chan district on August 1.

Thai police believe the nine suspects used four motorcycles to attack Sopoj in front of his house out of anger that Supoj provided information to police, causing their attempt to smuggle 7 million meth pills on July 24 to be foiled.

The Thai authorities will seek the UWSA’s cooperation in repatriating the Thai suspects to face charges in Thailand.