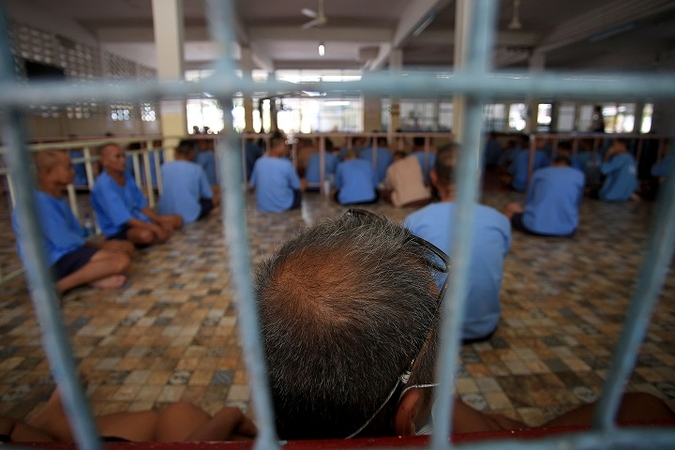 With nearly 400,000 people behind bars, conditions in Thai prisons are getting so crowded that an inmate does not even have a metre of space to lie down. Hence, the National Human Rights Commission (NHRC) and the Thailand Institute of Justice (TIJ) considered other options for convicts facing jail terms of less than five years at a seminar on Friday (September 6).

The issue was discussed at the “Criminal Punishments and National Human Rights Principles” seminar at Bangkok’s Centara Government Complex Hotel.

TIJ director Kittipong Kittayarak said Thai prisons, which have the sixth most prisoners in the world and the highest in Asean, have space for only 120,000 inmates, but are now housing more than 300,000 prisoners.

"Although Thailand has the largest number of inmates among Asean countries, this does not mean it has the highest crime rate. Instead, this reflects some problems in the justice procedure. The increase in the number of inmates stems from the amendment to the drug law, which has become so strict that anybody with any relation to methamphetamine is landed in jail. Such offenders account for 70 per cent of the men in prison and 87 per cent of women. Also, 20 per cent of the inmates are in remand pending trial,” Kittipong said.

Of the prisoners whose cases have been finalised, 50 per cent are those facing terms of less than five years, Kittipong added.

Each year, the government allocates Bt12 billion to the Corrections Department, of which Bt8 billion is spent on food, he said.

Also, he said, that though statistics show that 30 per cent of released inmates recommit crimes, this does not mean that the Corrections Department is doing a poor job.

“We have to admit that the number of inmates behind bars has climbed since 1994. The problems we are facing don’t just stem from the Corrections Department, but the whole justice system,” he said.

In 2000 and 2001, the problem of overcrowding had been solved by moving drug abusers to drug rehabilitation centres, he said, which reduced the number of inmates from 240,000 to 160,000. However, the lack of a strict rehabilitation programme and a failure in prioritising the public health policy to tackle the problem has let the issue emerge again.

The problem of overcrowding can be solved if the authorities shift their focus from throwing people behind bars in retaliation and consider rehabilitation, so wrongdoers become remorseful while the victims are provided with remedial measures so they are content, such as in road accident cases.

Kittipong also advised that drug abusers and small-time dealers be separated from the major drug traffickers  in line with a better public health policy. Moreover, he said, police and public prosecutors should find a better method of settling cases out of court and consider other methods such as electronic monitoring devices with limited freedom, probation or social services for petty criminals.