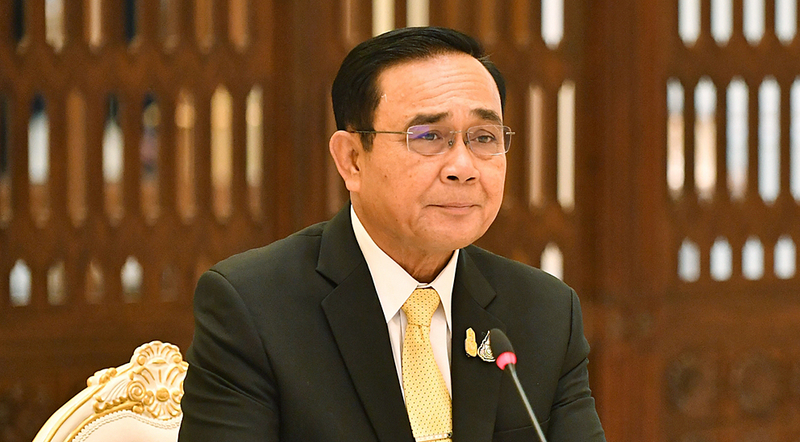 Constitutional Court judges voted unanimously Wednesday not to hold a judicial deliberation of a complaint against Prime Minister General Prayut Chan-o-cha about the controversy related to his oath wording.

The judges held a meeting at 1.30 pm to consider the complaint of Phanupong Churak, a Ramkhamhaeng University student, against Prayut.

Phanupong alleged that Prayut’s failure to complete the wording as required by the charter when he led his Cabinet to make an oath of allegiance to the King violated the charter and violated his rights and liberty. The ombudsmen forwarded the complaint to the court for a final decision.

At 4.38pm Wednesday, the Office of the Constitutional Court issued a press statement announcing that the judges had ruled unanimously to reject the complaint on the grounds that the issue did not fall under the power of any constitutional organization to investigate.

The court reasoned that the oath taking before taking office by the Cabinet was deemed a political activity of the Cabinet, a constitutional organization, in its relation to the monarch.

The court also reasoned that after the Cabinet was sworn in on July 16, His Majesty the King signed a printout of his speech that day and sent it to the Cabinet on August 27 to use as a guideline for administering the country.

“As a result, the oath taking by the Cabinet is no longer under power of any constitutional organization to review,” the court’s statement says.

The statement noted that the court had voted to reject a complaint by Ruangkrai Leekijvattana, a former Thai Raksa Chart Party member, who asked the court to consider whether Prayut’s failure to complete the oath wording violated Article 161 of the charter.

The opposition has alleged that Prayut violated Article 161 of the charter for failing to state during oath taking ceremony that he would uphold and adhere to all provisions of the charter.

Prayut has admitted to senior government officials he made a mistake and would take the blame alone.

Chief opposition whip Suthin Klungsaeng, a Pheu Thai MP, said since the court has made a ruling the opposition would be able to debate in the issue in a wider scope.

He said since the court refused to deliberate the issue, it would be the duty of the House to conduct its check and balance duty by reviewing it to seek a solution or an end to the matter.