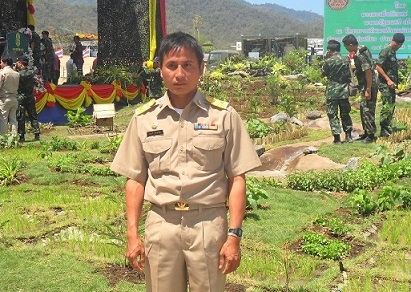 The Central Institute of Forensic Science (CIFS) is extracting DNA from the eight bones that reportedly belonged to Karen activist Porlajee “Billy” Rakchongcharoen for specific and more in-depth tests in order to determine his time of death – a process that will take at least two weeks to complete, CIFS director Pol Lt-Colonel Wannapong Khotcharak said on Friday (September 13).

The bones were retrieved from where a 200-litre oil drum was submerged near a bridge leading to the Kaeng Krachan Dam in Phetchaburi province was found in April. The drum contained two bones, including a piece of skull, which were proved to belong to Billy through DNA tests.

The Department of Special Investigation (DSI) used this information last week to confirm that Billy, who went missing in suspicious circumstances more than five years ago, had been killed and launched a murder investigation. The CIFS, meanwhile, has been conducting tests on some 20 pieces of bone found at the spot.

Korrawat added that the investigators did not have any particular points to discuss with the minister, and that they only wanted to thank him and his ministry’s executives for cooperating with the DSI.

He added that many DSI officials were still working on site and interviewing witnesses, saying their conclusion was pending CIFS test results on the eight remaining human bones. He said DSI chief Pol Colonel Paisit Wongmuang will hold a meeting to follow-up on the progress next week.

Billy was last seen in Kaeng Krachan National Park on April 17, 2014, when he was apprehended by then-park chief Chaiwat Limlikitaksorn and his four colleagues at a checkpoint for allegedly illegally collecting wild honey from the forest.

Billy was known to have had a continued dispute with Chaiwat, as the activist encouraged ethnic Karen living in the park to file a complaint against the park chief over alleged abuse. Park officials have consistently insisted that they only very briefly detained Billy for questioning and released him without charges.