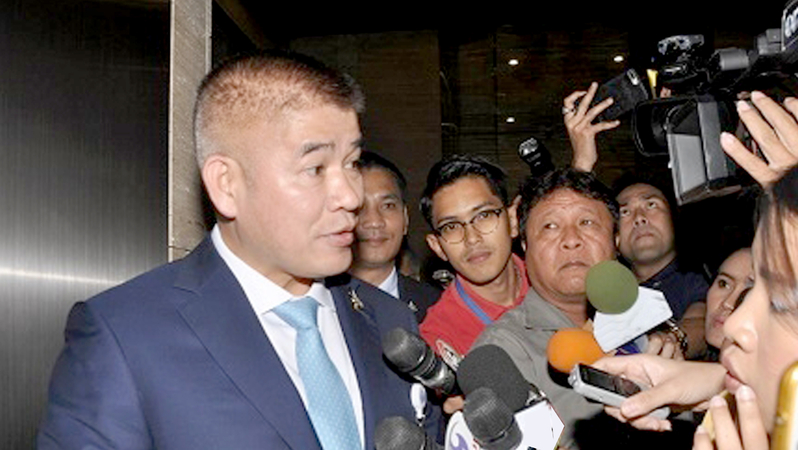 Embattled Deputy Agriculture Minister Thammanat Prompao claimed that the series of accusations levelled against him by the opposition and on Thai social media were aimed at toppling the government.

Questions have been raised about his fitness to hold a Cabinet position because of his alleged entanglement in a drugs-smuggling case in Australia decades ago, doubts over the revocation of his police ranking as well his PhD degree.

"I'm not the target. As I have told reporters many times before, I am a key player in the formation of the present government because I was the one who handled the gathering of the required votes to back General Prayut Chan-o-cha to be the prime minister."

He said those who were behind this multiple-pronged attack on him know that these controversies would shake the government and it would lose stability. "Their ultimate goal is to overthrow the government, General Prayut and General Prawit Wongsuwan.”

He said he had become "a village bombarded with bullets", but the real aim was to topple the government.

“If they really wanted to target me, why are they doing it now when they could have done this before?" he asked.

He said intelligence officials were aware who was behind this campaign. "It’s a group that aims to overthrow the government," said Thammanat, also known by the alias "Meu Prasan 10 This" (all-direction master coordinator)

Thammanat said he had received a lot of support from fellow-politicians from both sides, especially from Prayut and Prawit. He insisted that he had nothing to hide and had already clarified all points. "I can answer all the questions. I can solve my problems. I don't see myself as a weak link," the deputy minister said.

Thammanat had explained himself during a parliamentary questioning session on Wednesday (September 11) about an Australian media report this week, which said that he had served four years in a Sydney jail in 1993 after allegedly pleading guilty to conspiring to import a commercial quantity of heroin. That case in Australia had been settled a long time ago. He claimed that he had never confessed to smuggling heroin following his arrest in April 1993, that his case had never been taken to court, and that he was only in detention as per a pre-bargaining process until the inquiry process was complete.

On the same day, political activists Ekkachai Hongkangwan and Chokchai Paiboonratchata asked the Election Commission (EC) to look into several points related to Thammanat, such as how he had managed to get reinstated in the Army and then got promoted in 1997 after returning to Thailand and why he had used the military rank of captain in the documents he had submitted to join the current Cabinet even though his title was revoked through a Royal Gazette announcement in September 1998.

Thammanat was also accused of having a bogus PhD degree from an online “California University”. This issue was raised by CSI LA, a Facebook page which published informatiom that led to a probe against Deputy Prime Minister Prawit over his luxury watch collection before.  Many Thai netizens now criticised Thammanat over his alleged lack of qualification to serve as an MP.

Deputy Prime Minister Wissanu Krea-ngam, on Friday, again came to Thammat’s defence. Wissanu pointed out that irrespective of whether Thammanat’s doctorate degree was fake or real, it would not disqualify him from being a Cabinet member because that matter was irrelevant. A Cabinet member must have a bachelor’s degree or equivalent under the Constitution's Article 160 and all the 36 Cabinet members, including Thammanat, had been checked, he said. Wissanu declined to offer a specific response when asked if Thammanat was being targeted with the intention of discrediting the government.