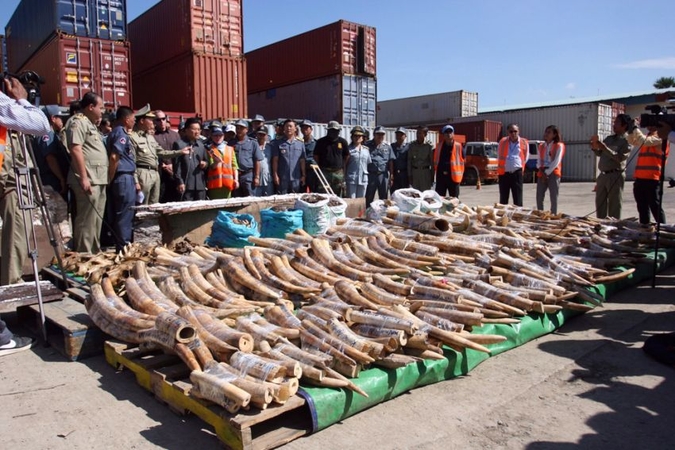 Officers from Cambodian customs display some of the 1.3 tonnes of African elephant tusks seized from containers shipped from Mozambique to Phnom Penh in 2016. Wildlife Alliance

The Ministry of Environment has issued a total of 59 notices to souvenir vendors in the capital and Siem Reap and Preah Sihanouk provinces instructing them to halt the selling of sculptures made of elephant ivory or rhinoceros horns and all forms of trade involving wild animals.

An official warned that legal action would be taken without exception if there was sufficient evidence they were contravening the directive.

The ministry issued further notices on Friday instructing 27 vendors in Phnom Penh to stop the selling of ivory or rhinoceros horn sculptures.

Ministry spokesman Neth Pheaktra told The Post on Sunday that following an investigation, notices had been issued to 59 souvenir vendors who were suspected of secretly selling banned items made from ivory and rhinoceros horns.

“Selling, importing and exporting of such items is a criminal offence, and offenders face imprisonment if found guilty.

“The occurrence of these activities on Cambodian territory will harm the government’s efforts as a member state of Convention on International Trade in Endangered Species of Wild Fauna and Flora,” he said.

Pheaktra said many vendors suspected of secretly selling illegal sculptures had not yet handed in any items to the police or the ministry as required by previous notices.

A Ministry of Environment report stated that more than five tonnes of rhinoceros horns and elephant ivory were confiscated from 2016-2018.

It said the evidence was being kept safe for scientific research and to be displayed at exhibitions.

A store owner at Tuol Tompoung Market (also known as Russian Market) told The Post that he had not received a notice, but said he was aware the ministry had announced on its Facebook page that selling such items was prohibited.

He said most souvenir stalls in Phnom Penh, such as at Tuol Tompoung Market and Central Market (Psar Thmey), sold sculptures carved from wood, silver, copper or bronze.

The items were legally recognised by the Ministry of Culture and Fine Arts, he said, and most buyers were tourists.

“Certain buyers are government officials. They buy the items to present to foreign officials as gifts. I haven’t seen any rhinoceros horns or elephant ivory, and I wouldn’t know where to find such things,” he said.

Some people believe that rhinoceros horns or ivory carved with depictions of gods or goddesses can protect them from harm, while some traditional healers and residents in mountainous forest areas use them as an antidote to treat cancer or other ailments.

Brong Nob, a Bunong ethnic community chief in Koh Nhek district’s Royor commune in Mondulkiri province, told The Post on Sunday that besides being used to prevent and cure illnesses, Bunong people had traditionally made carved rhinoceros horns and elephant ivory into earrings and beads.

“They understand it as a religious practice which is part of the identity and tradition of Bunong ethnic people. But today, it’s less likely that you’ll see people wearing those sort of items,” he said.

He said he and his community were worried about losing their ethnic identity, but expressed support for banning the sale of ivory and rhinoceros horn souvenirs.