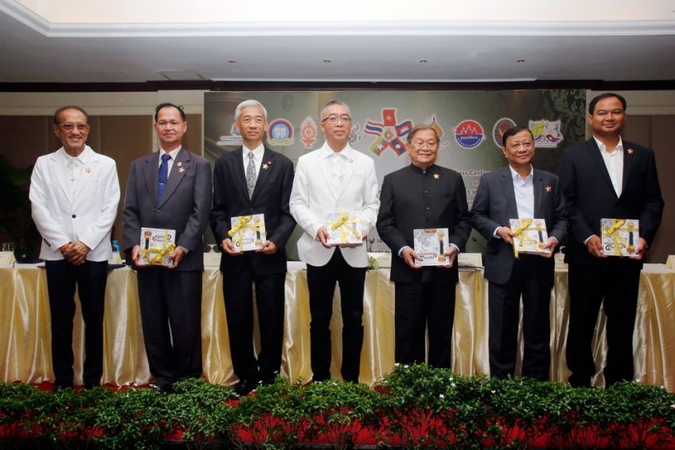 The second Dhamayatra pilgrimage, a 2,000km journey to unite Buddhists across five countries in the Mekong River Basin, will end in Siem Reap next month. Photo credit to Heng Chivoan.

The Thailand-based Bodhigayavijjalaya 980 Institute announced on Wednesday that its second Dharmayatra in October is to end in the Kingdom’s Siem Reap province after a more than 2,000km pilgrimage across five Mekong River basin countries.

The Dharmayatra aims to gather Buddhists in the region as one, establish friendships through dharma and strengthen relations between the five nations.

Supachai Verapuchong, the secretary-general of the Bodhigayavijjalaya 980 Institute, said in a press conference that the Dharmayatra would travel the distance by bus and on foot, passing through towns important in the history of the spread of dharma – the teachings of Buddha.

The Dharmayatra is to start at Wat Phra That Pha Ngao in Thailand’s Chiang Rai province on October 14. It will then cross into Myanmar, Laos and Vietnam, before concluding in Cambodia from October 29-31 in Siem Reap province.

Supachai said 120 people, including laymen and Buddhist monks, would join the pilgrimage. Twenty Cambodians are to take part, led by Samdech Uddom Vongsa Muong Ra, one of the Kingdom’s chief monks.

He said the pilgrimage was wholly supported by the Bodhigayavijjalaya 980 Institute, which was founded 13 years ago.

“Our wish is that the five regional countries will come together as one in respecting Buddhism and spreading Dharma to our future generations.

“We wish to see this region continue to spread Buddha’s teachings for another 2,500 years. This is the aim of organising this Dharmayatra. We don’t have any hidden agenda. Our goal is just to make this Dharmayatra happen,” Supachai said.

He said traditional alms offering, instruction, meditation and chanting at historical places related to the spread of Buddhism would be part of the pilgrimage.

Eighteen Bodhi trees brought from India are to be planted along the route. Many will be planted in Laos, where the participants will spend more than a week.

Minister of Information Khieu Kanharith, who attended the press conference, said the pilgrimage across the five Mekong countries was crucial in strengthening spiritual and moral relations through Buddhism – what was called Buddhist diplomacy.

He said while Buddha was born in India, or what is now modern-day Nepal, there is now a strong following of his teachings across the five countries.

He said people should take a break from this and try to find peace of mind and a sense of understanding.

“This is what the pilgrimage organised by the Bodhigayavijjalaya 980 Institute wants to achieve.

“The Dharmayatra intends to spread and protect Buddhism, with emphasis on common Buddhist values that people in the five Mekong countries on the route share,” Panyarak said.

He said the pilgrimage was a chance to reflect on oneself and appreciate the similarities and differences of the people, cultures and local beliefs found on the journey.

“This reflection will lead to better understanding and tolerance – something that will bring us closer and contribute to sustainable peace in these neighbouring countries in the Mekong region.

“This is in line with the promotion of closer relations through Buddhist diplomacy,” Panyarak said.

Nattawut Pothisaro, the deputy head of the Thailand-Cambodia Association and former Thai ambassador to Cambodia, said the pilgrimage would not only bring Cambodia and Thailand closer but all the countries in the region.

Supachai, the secretary-general of the Bodhigayavijjalaya 980 Institute, recalled the first Dharmayatra in 2017, which a huge number of people participated in, particularly from Laos and Thailand.

He said the Lao government closed roads so the pilgrimage of hundreds could progress smoothly. The same thing happened in Vietnam.

The pilgrims had interesting experiences In Cambodia, he said, especially when crossing into Stung Treng province from Laos.

“In Stung Treng town, lots of Buddhists came offering alms for three hours. Eight pickup trucks could not take away all the food offered by the people,” Supachai said.

Saray Chhon, under-secretary of state at the Ministry of Cults and Religion, said the ministry wholeheartedly supported the Dharmayatra.