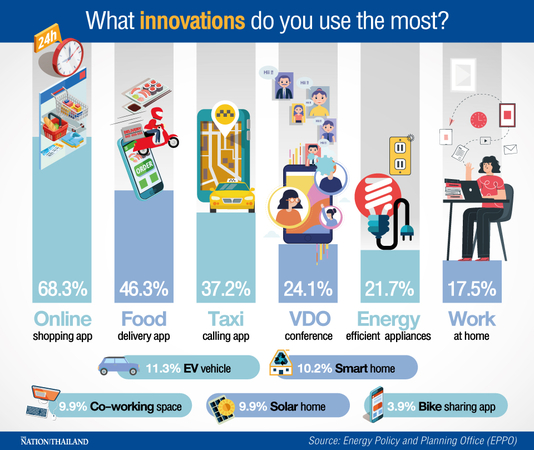 The Energy Policy and Planning Office (EPPO) of the Ministry of Energy has conducted a poll via its facebook page “@StartHaiUpTH” under the topic of ‘What innovations do you use the most’.

The poll, launched last July, explored the usage of innovations among Thais across all ages and professions, aiming to promote usage of energy-efficient innovations.

It was divided into four categories: The frequently used (over 40 per cent of total innovation usage); the moderately used (21-40 per cent); the rarely used (10-20 per cent); and the hardly-used (lower than 9 per cent).

Out of the 382 respondents, 68.3 per cent said online shopping application was their most frequently used innovation, followed by food delivery (46.3 per cent).

In the moderately used category, 37.2 per cent of respondents cited taxi-calling, 24.1 per cent VDO conference service, followed by energy-efficient appliances (21.7 per cent).

Meanwhile, 17.5 per cent of respondents said they rarely used any innovation that supports working at home, while 11.3 and 10.2 per cent cited EV vehicles and smart home devices as rarely used innovations.