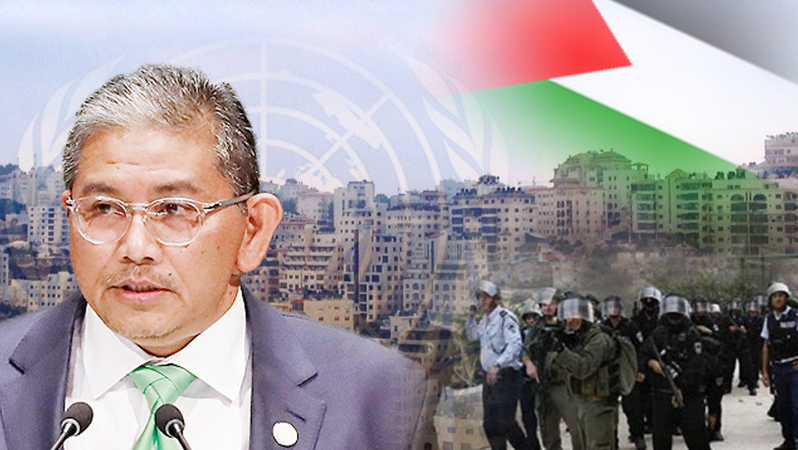 As the premier multilateral forum, there is no equal to the United Nations’ (UN) role in ensuring that a just solution is achieved to establish a sovereign State of Palestine, based on pre-1967 borders and East Jerusalem as its capital, Minister of Foreign Affairs II Dato Seri Setia Awang Haji Erywan bin Pehin Datu Pekerma Jaya Haji Mohd Yusof emphasised at the General Debate of the 74th session of the UN General Assembly in New York on Monday.

The minister noted that despite the UN’s best efforts, there is still an increase in conflicts around the world that has left many displaced, destitute and vulnerable.

“We see the perpetual struggle of the Palestinian people for statehood and their inalienable right to self-determination continuously being neglected. Prolonged occupation, forced displacement and illegal settlements have deprived them of every human right,” Dato Seri Setia Awang Haji Erywan added.

Although the 74th session of the General Assembly has heard repeated calls for no one to be left behind, the minister highlighted that however, the Palestinian people have been left behind for as long as they have been fighting for their existence.

He said this is often mired by increasingly complex and interconnected challenges where more and more countries are struggling to address overlapping concerns, such as deforestation and access to clean air. “This reflects the indivisibility and multidimensional nature of the SDGs, which must be addressed collectively and in its totality.

“The path that each country takes to achieve their goals will be unique, but we recognise that all are mutually reinforcing to one another.”

For its part, he shared that Brunei will present its Voluntary National Review for the first time at next year’s High Level Political Forum on Sustainable Development, where it will share best practices, lessons learned and challenges encountered.

“Globally, while overall progress is made, trends indicate that the pace of improvement is too slow to ensure success by 2030. While we believe in the common pledge for no one to be left behind, we also recognise that no country can do it alone. We, therefore, welcome the call to accelerate collective action as contained in the Political Declaration of the SDG Summit. Success in achieving the SDGs will be a test of global cooperation, partnership and collaboration that requires action at the local, national and regional levels,” he said, adding that Brunei is working closely to advance a people-centred ASEAN Community which complements the ambitions of the 2030 Agenda for Sustainable Development.

He also shared with the floor Brunei’s efforts to localise the impact of SDGs by continuing to undertake measures aimed at the well-being, peace and harmony of its people. “The government has ensured access for all for affordable housing and healthcare, as well as clean water and environment, in order to improve the quality of life. As a country with a young demographic, we also prioritise the education of our youth and recognise the importance of life-long learning. Education will empower and better prepare the people, acting as a catalyst for achieving the SDGs and for our continued development. People need the tools to build a better life.

In this regard, His Majesty Sultan Haji Hassanal Bolkiah Mu’izzaddin Waddaulah ibni Al-Marhum Sultan Haji Omar ‘Ali Saifuddien Sa’adul Khairi Waddien, Sultan and Yang Di-Pertuan of Brunei Darussalam’s Government remains committed to providing free high-quality education all the way to the tertiary level, so no Bruneian is left behind,” he added.

In Brunei’s quest for progress, the minister also said that there are costs associated with economic development and damage to the environment is the most common.

“As citizens of the world, we are all stakeholders in ensuring a healthy planet. There is a shared global responsibility that falls on all of us, be it, governments, private sectors and individuals, as well as corporate players and investors alike, to be principled in our undertakings. There must be a universal commitment to overcome this existential threat and effectively work towards building a sustainable future,” he added.

He relayed his concern on the effects of climate change that are being felt now and that will only get worse, while noting that technological advancements have made it possible for us to engineer modern solutions to modern challenges. “Innovations like carbon capture and negative emission technologies have ushered in a new frontier to reduce and remove carbon emissions. We therefore believe that more needs to be done in sharing and transferring technology, so that we can all move from reactive responses to proactive solutions on climate change,” he added.

He also touched on the impacts of digital revolution, which he said has redefined social interaction, proliferated e-commerce and intensified information-sharing but cautioned that we must take careful steps to prevent its malicious use. “While technology like the Internet can offer solutions, it has also given rise to an age of unprecedented misinformation and manipulation.. while we must adapt to the technological advances, it is also urgent that we collectively address the emerging threats they can pose,” he added.