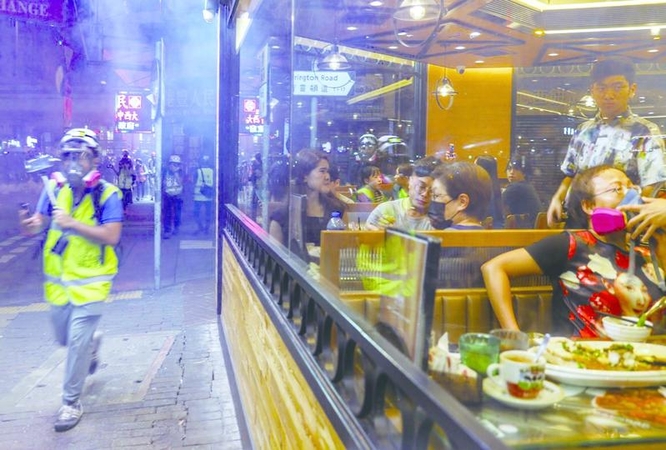 Diners in a Causeway Bay restaurant become upset as tear gas seeped into the diner on Friday night. Rioters took to the steets again after the government announced ban on mask-wearing at public assemblies.

Hong Kong residents expressed their anger, desperation and fear of anti-government rioters’ lawlessness after the unprecedented vandalism and violence over another weekend.

On Friday night, rioters not only clashed with police and started fires on the streets, but vandalized metro stations, shops, restaurants and ATMs of banks with links to the mainland across the city.

MTR Corp, the city’s sole rail operator, had to shut down the entire metro system on Saturday. More than half of the stations remained closed on Sunday.

Several bus routes were diverted after more than 100 sets of traffic lights were damaged or tampered with by rioters.

Hong Kong became a ghost town on Saturday, as major shopping malls, supermarkets and restaurants across the city closed the whole day or shuttered early.

After the city’s rail network was ground to a halt, a Hong Kong resident surnamed Xiong had to trek for more than two hours to commute to work, which normally takes 70 minutes.

Xiong and her 6-year-old son were “desperate” after she got home at about 9 pm but could not find any restaurants open. “At that moment, I felt Hong Kong had become an isolated island,” she said.

Xiong condemned the violence and vandalism. “Protesters can express their demands peacefully, but they chose a way that stoked fears and seriously impacted ordinary people’s lives. It is unacceptable,” she said.

A mainland tourist surnamed Lou cut her visit to Hong Kong short because of the paralyzed traffic and closure of major shopping malls.

Lou watched news on television about what happened on Friday night. “Rioters went crazy. Their acts made me feel unsafe in the city,” Lou said.

An anonymous taxi driver recalled he was stopped by black-clad radicals several times when he was on the way from Siu Sai Wan to Chai Wan on Saturday night.

Only police officers have the right to stop cars and investigate, but these black-clad men defied the law and seemed to “rule” the city, the driver complained.

The taxi driver, who used to brave No 10 typhoons, decided on Saturday to stop work immediately. “I was scared they would vandalize my car,” he said.

According to online video footage, furious radicals vandalized the car of a female driver who stopped to remove road barriers that rioters had erected. When she tried to film the scene, her mobile phone was knocked to the ground by those in the mob.

At noon Saturday, more than 20 residents were seen lining up to withdraw money from a Bank of China ATM in a corner of the Choi Ming Shopping Centre, in New Territories East. Several Bank of China ATMs at nearby shopping malls and metro stations were seriously damaged by mobs the night before.

A housewife surnamed Pang said the riotous mobs have put the city into a “lawless” and “dangerous” situation.

Pang hopes the violence and chaos can be quelled and normal life can resume as quickly as possible, either with the central government’s help or by the Hong Kong government on its own.

“I also hope all residents cherish what we have and cherish the city we love,” Pang added.