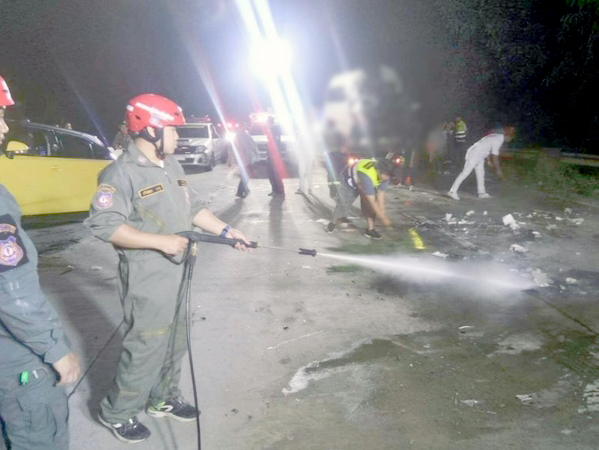 A van carrying students to Bangkok to receive scholarships crashed into the back of a 10-wheel truck in the early hours of Tuesday morning killing 3 and injuring 19, six of them seriously.

Police were alerted to the accident at 1am and rushed to the spot on Highway 1, Phahonyothin Road, just outside Lampang. Three female students aged between 17 and 20 were killed on impact. Among the 19 injured were 34-year-old Taechin Phochthong, the driver of the van, and two individuals travelling in a car that was caught up in the accident. Rescue teams rushed the injured to Koh Kha hospital, with the six most seriously injured, all of them students, later transferred to the Lampang hospital.

Somyot Thongsri, 56, the driver of the truck, told police that he was travelling in the left lane when he saw headlights in his mirrors and then heard a loud crash. He surmised that the van had pulled out to overtake but failed to complete the manoeuvre. The accident is now under investigation.

Police later learned that the van was taking students from Mubankru Technological College to receive scholarships in Bangkok.