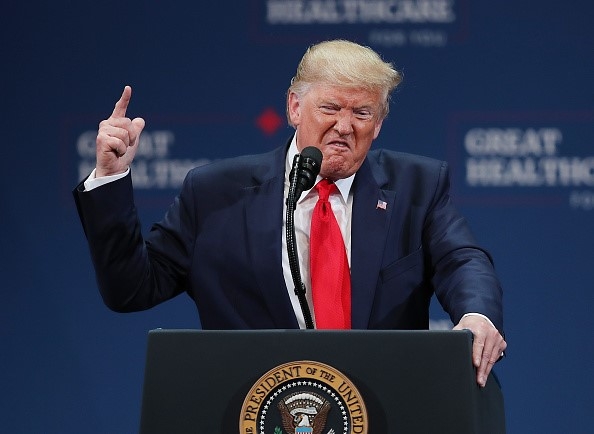 The White House on Wednesday (Thailand time) said it would not cooperate with the House’s impeachment inquiry of President Donald Trump, arguing that the probe “violates the Constitution, the rule of law, and every past precedent”, in an escalating standoff with an unbowed Congress.

In a scathing, eight-page letter, the White House said the inquiry into the Ukraine scandal was without merit, complained that the president has been denied his due process rights and argued that Democrats were intent on overturning the results of the 2016 election and influencing the 2020 contest.

“To fulfill his duties to the American people, the Constitution, the executive branch, and all future occupants of the Office of the presidency, President Trump and his administration cannot participate in your partisan and unconstitutional inquiry under these circumstances,” White House counsel Pat Cipollone wrote to top congressional Democrats.

In response House Speaker, Democrat Nancy Pelosi, signalled that the Democrats were undeterred and would move ahead with their investigation focused on Trump’s pressure on a foreign leader to dig up dirt on a domestic political rival.

“The White House should be warned that continued efforts to hide the truth of the president’s abuse of power from the American people will be regarded as further evidence of obstruction,” Pelosi said in a statement. “Mr President, you are not above the law. You will be held accountable.”

The White House letter, which lacked substantive legal arguments and echoed Trump’s political broadsides, capped a day of defiance and challenges as House Democrats have tried to force recalcitrant administration officials to divulge potentially incriminating information over Republican objections. But it also highlights the limitations of Democrats’ ability to exercise their oversight authority in the face of an administration that appears unfazed by flouting subpoenas.

The White House’s resistance throws a new and formidable roadblock in the way of House investigators attempting to have various State Department officials depose this month as they build a case that Trump abused his office by trying to pressure Ukrainian President Volodymyr Zelensky to investigate former vice president Joe Biden, a 2020 Democratic presidential candidate, and his son Hunter.

Cipollone dismissed the notion that Trump did anything wrong when he spoke to Zelensky on that July 25 call, details of which were revealed in a rough transcript released by the White House last month.

“The record clearly established that the call was completely appropriate and that there is no basis for your inquiry,” the counsel wrote.

The three House Democratic chairmen ‒ California’s Adam Schiff of the Intelligence Committee, New York’s Eliot Engel of Foreign Affairs and Maryland’s Elijah Cummings of Oversight ‒ said on Tuesday that they are trying to determine whether Trump violated his oath of office and endangered national security “by pressing Ukraine to launch sham investigations to assist his personal and political interests rather than the interests of the American people”.

While the administration is refusing to provide witnesses or documents, Democrats have been negotiating for testimony from the whistleblower whose complaint about Trump’s call prompted the impeachment inquiry. The Intelligence Committee is considering extraordinary steps, including masking the individual’s identity, to secure the interview.

The whistleblower wrote in a two-page memo that the intelligence community’'s inspector-general provided last week to the congressional intelligence committees that a White House official called the substance of the July 25 call “crazy” and “frightening” and suggested that Trump may have violated federal election laws by asking Zelensky for a “favour” of investigating the Bidens.

A person familiar with the memo added that the White House official also thought it was improper that the record of the call was moved to a highly classified server.

The fast-moving developments came as a Washington Post-Schar School poll found that a majority of Americans say they endorse the decision by House Democrats to begin an impeachment inquiry, and nearly half of adults also say the House should take the additional step of recommending that the president be removed from office.

The recent revelations have caused many Americans to rethink their opinions on impeachment.

Looking to bolster his defence, Trump is likely to add former congressman, Republican Trey Gowdy, to serve as an outside lawyer for the impeachment process, according to senior White House officials with direct knowledge who spoke on the condition of anonymity to speak frankly.

Gowdy headed the House’s select committee that investigated the deadly 2012 attacks in Benghazi, Libya, and repeatedly demanded witnesses and documents from the Obama administration.

Over the course of more than two years, that panel spoke to 81 witnesses and reviewed 75,000 pages of documents, according to its final report. Most notably, former secretary of state Hillary Clinton testified for more than 11 hours before the committee on October 22, 2015.

Trump has regularly told White House officials that he does not want to cooperate with the House committees conducting oversight.

“He was livid last week after the release of text messages from Kurt Volker [special envoy to Ukraine], and news accounts from testimony that seemed to undercut his administration’s case,” said a White House official who spoke on the condition of anonymity to describe private talks.

In its stonewalling, the State Department blocked House investigators from deposing Gordon Sondland, the US ambassador to the European Union, and a central figure in the impeachment inquiry. Sondland had worked to ensure that the Ukrainians would investigate an energy company that previously paid Hunter Biden to sit on its board as a precondition for a meeting between the two heads of state.

Text messages supplied to the House last week by Volker show that Sondland coordinated with other diplomats, Trump’s personal lawyer Rudy Giuliani, and a top aide to Zelensky to secure what he called the “deliverable”, while defending Trump against concerns raised by other officials that they were attempting to orchestrate a quid pro quo.

“I would love to send Ambassador Sondland, a really good man and great American, to testify, but unfortunately he would be testifying before a totally compromised kangaroo court,” Trump tweeted on Tuesday.

Sondland was willing to testify, according to his lawyer Robert Luskin, but did not appear on Tuesday at the direction of the State Department. The order to Sondland’s lawyers not to testify came via voicemail at 12.30am on Tuesday, according to Democrats.

"As the sitting US ambassador to the EU and employee of the State Department, Ambassador Sondland is required to follow the Department’s direction,” Luskin said.

The White House letter suggests that the administration will take similar steps to block the testimony of former US ambassador to Ukraine Marie Yovanovitch, who is expected for a deposition with the panels on Friday. Attempts to reach a lawyer for Yovanovitch were unsuccessful.

Giuliani also pledged on Tuesday to disregard a House subpoena for documents related to his efforts in Ukraine.

“Let them hold me in contempt. We’ll go to court. We’ll challenge the contempt,” Giuliani said in an interview. He added that he would be “very interested” in speaking instead to the Republican-led Senate Judiciary Committee, where chairman and Trump ally Senator Lindsey Graham has promised to launch a Ukraine probe, centred on Giuliani’s testimony, to rival House Democrats’ impeachment-focused investigation.

In a string of tweets on Tuesday, Graham chastised House Democrats and said “it is time for the Senate to inquire about corruption and other improprieties involving Ukraine”.

The House panels are also expected in the days ahead to issue subpoenas for three Soviet-born operatives ‒ Lev Parnas, Igor Fruman, and Semyon Kislin ‒ who assisted Giuliani in Ukraine and have thus far resisted congressional summons.

House Democratic leaders have already stated that they consider the administration’s efforts to keep witnesses from testifying to constitute impeachable acts of obstruction. The White House countered in Cipollone’s letter that such a presumption constitutes “threats and intimidation”. It also “destroys the integrity of the process and brazenly violate fundamental due process”, as well as “every past precedent”, the White House argued.