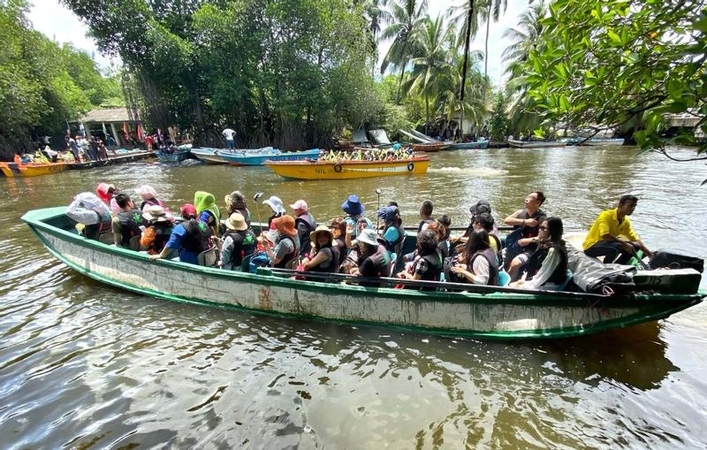 According to the Ministry of Culture and Tourism, over 7 million overseas visits were made during the holiday by Chinese travelers, who spent their money more rationally instead of snapping up goods as was commonly seen in previous years.

UnionPay Smart, a big-data solution provider in Shanghai, said that Chinese travelers spent about 32 billion yuan (US$4.5 billion) using cards, with expenses on shopping seeing a year-on-year decrease of 10.3 percent.

Chinese travelers' passion for Japan and Thailand reached a fever pitch during the holiday, according to travel agencies.

Qunar, an online travel agency in Beijing, said travelers were very enthusiastic about traveling to Japan, and the price of flight tickets to the nation remain high even after the holiday's completion.

For example, a round-trip flight from Beijing to Osaka cost about 4,000 yuan when the holiday ended on Monday, a slight decrease from 5,000 yuan during the holiday.

Qu Xin, a 35-year-old from Beijing, paid her second visit to Japan this holiday with her husband.

"We went to Tokyo last year, spending five days there," she said. "We wanted a quiet vacation this year, so we went to Nagoya, a smaller city but still beautiful. Most importantly, it has fewer travelers."

Japan attracted more Chinese travelers during the holiday than Thailand－which used to be the top choice for Chinese people－because of its simplified visa policy that took affect in May, according to Tuniu, an online travel agency based in Nanjing, Jiangsu province. Under this policy, Chinese residents can apply for single-trip visas online.

The culture and tourism ministry said that in addition to popular destinations like Japan, Thailand and Malaysia, some niche destinations including the Czech Republic, Austria, Hungary and Slovakia also registered a double-digit increase in tour package reservations.

Some destinations in the southern hemisphere such as New Zealand and Australia also received crowds of Chinese travelers this holiday thanks to their balmy climate, according to Tuniu.

Outdoor sports events in these countries, including bungee jumping, parachuting and paragliding, emerged as popular entertainment for Chinese travelers, letting them appreciate spring scenery from a high altitude.