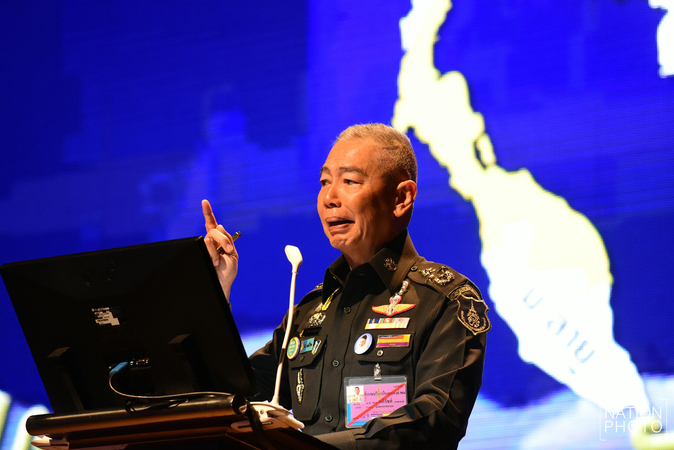 Army chief General Apirat Kongsompong voiced strong opposition to proposals to amend the Constitution’s Section 1. He was speaking at a special seminar on national security held at the Army headquarters on Friday (October 11).

“Any section of the Constitution can be amended but changing Section 1 should not be allowed because it concerns national security,” he told the seminar, which was attended by representatives of many organisations, local and foreign press, students and celebrities. Section 1 states that Thailand is one and  indivisible Kingdom.

Apirat’s comments was in response to a campaign launched by Opposition leaders, academics and civil groups to amend the junta-sponsored charter, which they say is undemocratic. The Army recently filed sedition charges against 12 people, including leaders of seven opposition parties and academics, after they held a forum on solutions for southern border provinces and to discuss amendments to the Constitution.

At the forum in Pattani on September 28, Chalita Bandhuwong, a lecturer at Kasetsart University’s Faculty of Social Sciences, criticised the military’s role in the South, saying the Army was overstepping its boundaries by controlling both military and police operations on security issues, promoting local social and cultural activities as well as supporting the living standards of the local people. She also said it was not necessary for the country to be a centralised state and suggested that Section 1 of the charter be changed accordingly.

However, it is still not clear if the Opposition, academics and civil groups have reached a consensus on which sections of the Constitution should be amended, as they have just kicked off the campaign.

Apirat, meanwhile, said the proposal to amend Section 1 would adversely affect other sections, especially the one on the monarchy. “The academics are smart, and they have chosen not to talk about it directly,” he said in a tone implying that the academics have hidden motives.

In response, Titipol Phakdeewanich, dean of Political Science at the Ubon Ratchathani University, said the Army chief was exaggerating the point and acting as if the military owns the Constitution and the country.

Titipol also suggested that Apirat was using tactics allowing the military to make political gains by exaggerating the idea of amending Section 1 and accused him of acting against the principles of freedom of expression guaranteed to the people by the Constitution. He said people should be allowed to voice their opinions constructively about the amendment of the charter, adding that the military does not own the Constitution or the country.

He also said that putting everything down to national security is not enough, they should also consider security from other dimensions, such as the people’s economic well-being and the protection of their rights.

“If Section 1 is amended, it may allow greater autonomy to the people in the deep South [it will not mean Thailand losing land],” he said, in reference to ideas proposed to end the prolonged conflict in the South, which has claimed more than 5,000 lives since 2004.

He also said that the Army and the government do not want to amend the charter because it allows the military to stay in power after the military-led coup in 2014. However, the Opposition wants to remove the authority granted to appointed senators, who selected the prime minister. Under the current charter, these senators have a five-year term so they can also choose the next premier once this administration’s four-year term ends.

“This charter largely protects the interests of the political establishment at the expense of the people,” he said.