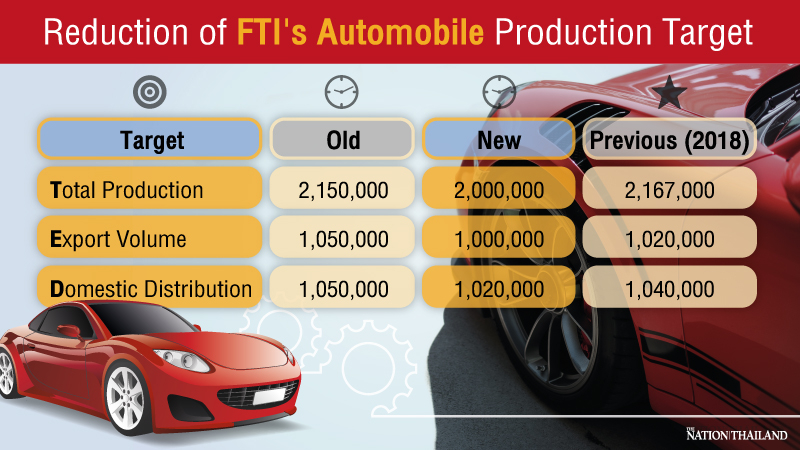 The Automotive Industry Club, under the Federation of Thai Industries (FTI), reduced its 2019 production target by 150,000 units to 2 million vehicles, attributing the decrease to stricter requirements for bank loans and the impact from flooding.

The Automotive Industry Club, under the Federation of Thai Industries (FTI), reduced its 2019 production target by 150,000 units to 2 million vehicles, attributing the decrease to stricter requirements for bank loans and the impact from flooding.

Moreover, the Industrial Confidence index in September sank to its lowest level in 12 months amid the slowdown in global economy.

Following the revised target of two million units in September, compared to a total production of 2.167 million vehicles last year, export target was cut to 1 million from 1.1 million, compared to the exports of 1.142 million units last year, said Surapong Pisitpattanapong, vice president and spokesman of the club.

“Moreover, the impact from flooding and stricter approval of car loans have led to a drop in car sales in the domestic market ” he said. “The manufacturing target for national sales has been reduced to 1.01-1.02 million from 1.05 million, lower than the total of 1.04 million units last year".

FTI President Supant Mongkolsuthree said the Industrial Confidence index in September stood at 92.1, down from 92.8 in August and the lowest since October 2018.

“Entrepreneurs are still worried about the global economic situation, while the Thai economy is softening," he said.

A survey of 1,103 entrepreneurs nationwide in the late September showed that more than 70 per cent were worried about the unresolved US-China trade war, while more than 50 per cent were uneasy with continuous strengthening of the baht.

“Although the government has launched measures to stimulate the economy and ease the concerns of entrepreneurs’, there are other internal factors that influence the confidence index. The current slowdown in domestic investment is reflected in the drop in the imports of machinery and raw materials for production”, the president said.

In the next three months, the index is expected to increase from 102.9 in August to 103.4 , mainly due to the positive impact from the government’s ‘Eat, Shop, Spend’ packages, both Phase 1 and 2, which will help boost domestic spending till the end of the year.