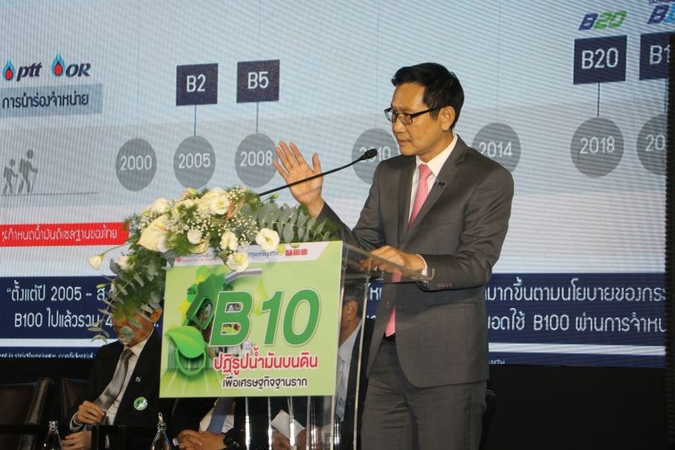 PTT Plc has followed King Rama IX’s initiative on biodiesel by improving its fuel gradually to make it more environmentally friendly, Auttapol Rerkpiboon, chief operating officer of Downstream Petroleum Group at PTT, said at the “B10, the Oil Reformation for Grass-roots Economy” seminar, hosted by Nation Multimedia Group on Monday.

The result of this improvement is B2, B3, B5, B7 and now B10 fuel, combining biodiesel and petrodiesel, he said, adding that PTT has distributed B2 since 2005 but has now replaced it with a newer formula, B10, which has been available since May.

“Before we began selling B10, we tested the fuel in real conditions in traffic,” explained Auttapol. “The test demonstrated that B10 helps reduce black smoke emissions by 40 per cent, or equivalent to 300 tonnes of PM2.5 per year. Besides, the fuel does not decrease engine efficiency.”

Moreover, changing from B7 to B10 will help resolve the fatty acid problem in oil tanks, as B7 has only 0.4 per cent of monoglyceride compared to 0.7 per cent in B10, he said.

“B10 is currently available at sixty PTT gas stations,” Attapol said. “Next year by March it will be available in every gas station. Also, B10 is cheaper than B7 by Bt2 per litre”.

PTT plans to change the reference standard in fuel emission testing from Euro 4 to Euro 5. “It is around four to five years before the law enforces the Euro 5 standard in Thailand; however, preliminary results of the test will be known by 2020.

“The government’s policy of supporting B10 will help increase use of this fuel. However, government agencies should coordinate with one another to prevent oversupply of crude palm oil, while those ministries need to improve their management efficiency by using digital technology,” Attapol added.