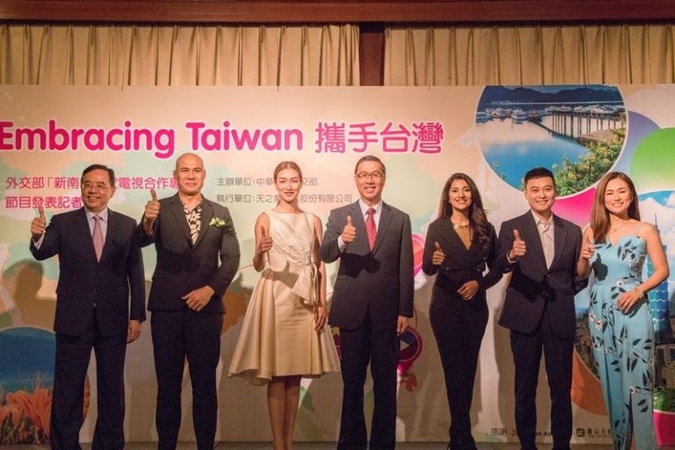 MOFA Vice Minister Miguel Li-jey Tsao (center) and Henry Ming-jeng Chen (left), director-general of the Department of International Information Services, give the thumbs up alongside representatives of production teams from India, Thailand, Vietnam and the Philippines during the launch ceremony for a series of TV shows showcasing Taiwan co-produced with broadcasters from the NSP target countries at the Grand Hotel Oct. 22 in Taipei City. (Courtesy of MOFA)

By Emerson Lim
The China Post/ANN

TAIPEI (CNA) — Four tailor-made television shows promoting Taiwan and co-produced by the Taiwan government and TV stations in four Asian countries will be aired in their respective countries next month with the aim to enhance people-to-people ties, the Ministry of Foreign Affairs (MOFA) said Tuesday.

The project, “Embracing Taiwan” (攜手台灣), is produced by the ministry in cooperation with TV stations in the Philippines, Vietnam, India and Thailand, MOFA Vice Minister Tsao Li-Jey (曹立傑) said at a press conference to mark the launch of the project.

“The project uses a fresh approach that takes into account the cultural traits and preferences of local audiences, and will be broadcast in their languages to foster a better understanding of Taiwan,” Tsao said.

“There are so many ways to fall in love with Taiwan,” said Valerie Tan (陳玉雲), CNN Philippines’ lifestyle magazine show host, who shot the Philippine edition for five days in September.

Tan, who studied Chinese in Taipei about 10 years ago and has since visited Taiwan several times, said she is very familiar with Taiwan and loves the food, the cleanliness and especially the friendliness of the people.

“Filipinos only know Taipei, but there is also Tainan, Taichung and Kaohsiung. We want Filipinos to visit other parts of Taiwan,” she told CNA.

Although the TV programs are all produced under the theme of touting Taiwan’s accomplishments with its 18 New Southbound Policy partner countries, their content varies in accordance with each country’s tastes, MOFA said in a press release.

For the Philippines, Taiwan is portrayed from the perspective of its music, culture and friendly people; for Thailand, the focus is on Taiwan’s beauty, inclusiveness, and harmony; for Vietnam, Taiwan’s vibrant society and passion for learning are central; and for India, the spotlight is on Taiwan’s diligent and cheerful people, according to MOFA.

“What sets this project apart from previous ones is that we produced them with local partners, in local languages, hoping to reach the grassroots level of their people,” said Henry Chen (陳銘政), director-general of MOFA’s Department of International Services.

MOFA has previously co-produced similar TV programs with international channels to promote Taiwan. However, they have been mostly recorded in English, Chen said.

The 60-minute programs by the four TV stations are all recorded in high-definition and are scheduled to be aired in two primetime episodes in their respective countries in November.

Aside from the different focuses of the programs, common subjects such as Taiwan’s tourism, cuisine, healthcare, biomedicine, smart technology and humanitarian efforts are explored, according to MOFA.