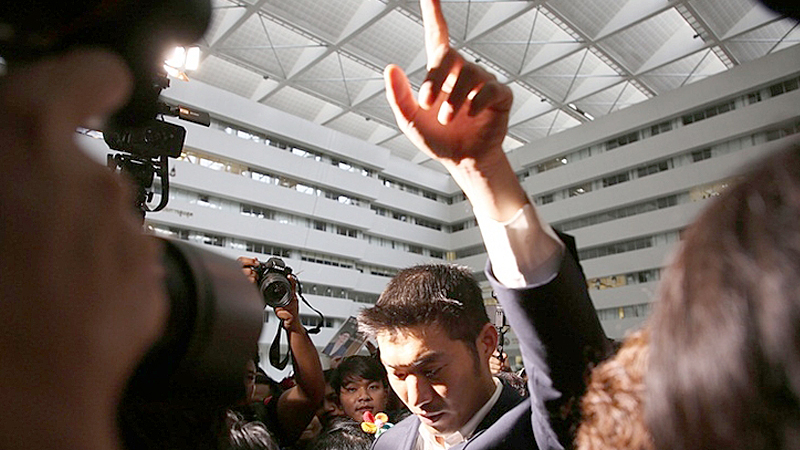 Disputing the Constitutional Court’s verdict against him on Wednesday (November 20), Thanathorn Juangroongruangkit, leader of the Future Forward Party, vowed to continue in his political career.

“The court attached more weight to assumptions rather than to facts or evidence,” he told reporters after the court session. “It’s my observation that there was no resolution in the form of a judicial body’s decision, unlike other courts’ verdicts.

“Moreover, the court mentioned Article 98 (3) of the Constitution, which prohibits politicians from holding shares in media companies that can influence public opinion. It did not say whether that article actually applied to V Luck Media and I,” he said, referring to his family-owned media business.

Thanathorn said his party would carry on regardless of his status as an MP, which he called irrelevant in deliberations over whether the party should be dissolved.

“FWP is a forever journey and I am still the party’s leader,” he said.

The court ruled 7-2 that Thanathorn had failed to prove he’d signed over his shares in V Luck before he registered to run in the March election, contrary to the law.

The court affirmed that he can no longer serve as an MP but it did not sentence him to jail for election fraud, as his supporters feared.

Party spokesperson Pannika Wanich declared on Twitter, “Although MP status has been ended, Thanathorn is still the team leader ... Future Forward Party is preparing for censure debate on Prayut’s government in mid-December. Those who have evidence of government corruption and abuse of power can send it to whistle@futureforwardparty.org.”

Numerous people were at the court to offer Thanathorn moral support and foreign diplomats attended the session to hear the verdict.

Observers have said the verdict could lead to Future Forward’s early demise, noting that other charges against him are still waiting to be tried in court.

It’s also been claimed that 64 other members of Parliament held media-company shares when they registered for the election. Election Commission decisions in those cases are awaited.