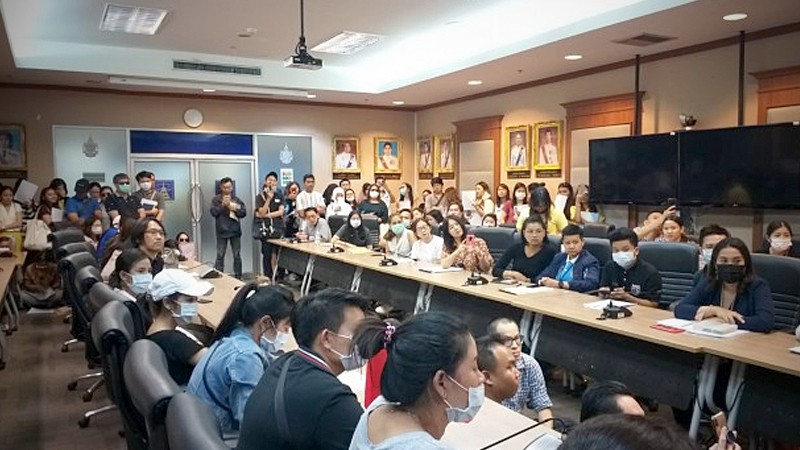 Some 100 plaintiffs filed complaints on Monday (November 25) with Samart Jenchajitwanit, vice minister of justice at the ministry’s branch office in the Chaeng Watthana Government Complex against the owner(s) of Facebook page “2gether” and Instragram account “twogether1” for selling cheap air tickets and tour packages that didn’t exist. Altogether 514 complaints have been made with total estimated damages amounting to Bt31 million.

“We would like the Department of Special Investigation (DSI) to take these cases and charge the culprit with public cheating and fraud,” Juthapha (last name withheld), 51, one of the plaintiffs said.
Juthapha revealed that she had bought five tour packages to 6 countries for more than Bt400,000 on the Facebook page on November 21, but later the page owner claimed that they had been cheated by the tour agency and was unable to refund the money. “I dug deeper and found that the page owner booked the tours and hotels in the names of family members instead of the company’s name, so I suspected this was a case of fraud.”
“Other victims who came here today were in a similar situation; some even went on the trip to Japan and got stranded there, as the company didn’t provide return tickets or any accommodation,” she added.
The vice minister said that he will accept the complaints and consider giving it to DSI later. “It is eligible for investigation as a public cheating and fraud case for which the law dictates that plaintiffs must number more 300 persons and this case has more than 500,” he said. “The Ministry of Justice will now bring in Rights and Liberties Protection Department to provide assistance for victims, especially those who borrowed money to buy tour packages.”