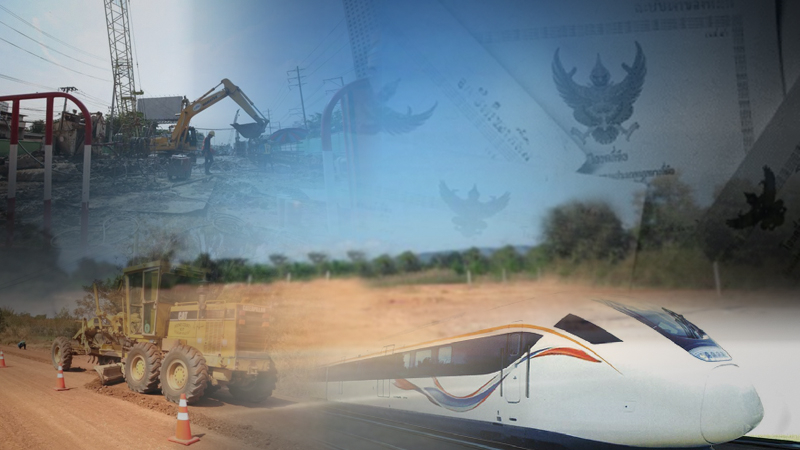 Govt to expropriate 50,000 rai of land for infra developments

The government plans to expropriate up to 50,000 rai of mostly farm land for infrastructure development of the Eastern Economic Corridor and other parts of the country.

The projects include a high-speed rail system linking three international airports and a double-track railway between the northern and northeastern regions.
The government has taken into consideration the impact of land expropriation on the livelihood of farmers.
Development of the high-speed train project will start this year with a royal decree on land expropriation stating that the State Railway of Thailand (SRT) must hand over land to the bid winner Charoen Pokphand (CP) within ninety days before construction starts.
The project will link three international airport (Don Mueang, Suvarnabhumi and U-tapao), stretching 200 kilometres in length between Bangkok, Samutprakarn, Chonburi, and Rayong.
SRT had held a public hearing for people living on the land targeted for expropriation. It estimated that the project would need approximately 1,000 plots of land, compared to the 3,000 plots specified by the royal decree.
Total land area for this project is estimated at 4,300 rai, including 3,571 rai owned by SRT and 850 rai through expropriation.
With regard to SRT's double-track railway project, land expropriation for the 678-kilometre tracks will start this year.
About 27,000 rai of land with 2,000 households will be affected by the project and it was reported that it had run into opposition from the residents.
In addition, the government plans to construct a motorway linking Nakhon Pathom province and Cha-am district of Phetchaburi province.
The Department of Highways has conducted a survey on the expropriation of farming area for the road project.
However, residents in Phetchaburi generally view it as benefiting the investors.
Besides, areas needed for his project includes a mangrove forest, which requires a Environmental Impact Assessment (EIA).