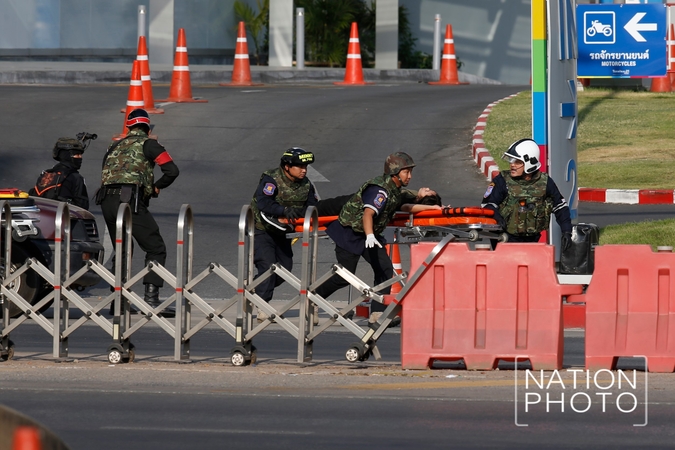 A soldier suspected of the deadly carnage in Korat that killed at least 27 people was shot dead by police on Sunday morning, National Police chief Pol Gen Chakthip Chaijinda said.

Two police who fought the gunman were among the fatalities. Of the 57 who were injured, 25 have been discharged by the hospital while nine are undergoing surgery, police officials said.

The suspect was holed up in the Terminal 21 shopping mall in Nakhon Ratchasima province since Saturday evening.

Police and military forces have sealed off the Terminal 21 Department store.

Gun shots were heard during night operations by security forces.The last firing was heard at around 5am on Sunday.

Many people were still believed to have been hiding in the department store before the police operation ended.

Sergeant-Major Jakapan Thomma has been identified as the soldier who allegedly went on the shooting rampage on Saturday.

At 3pm on Saturday, police in Korat were informed about a shooting in a house in Muang district. Colonel Anantaroj Krasae, 48, from the Surathampitak barracks was found shot dead along with Anong Mitchan, 65.

Anong was the mother-in-law of the slain commander.

Colonel Anantroj was the commander of Jakapan. Both the victims were allegedly shot dead by Jakapan.

The suspect also reportedly shot some soldiers at the barracks and later fled in a humvee. Along the way he fired more bullets. He later stormed into the department store and reportedly shot more people.