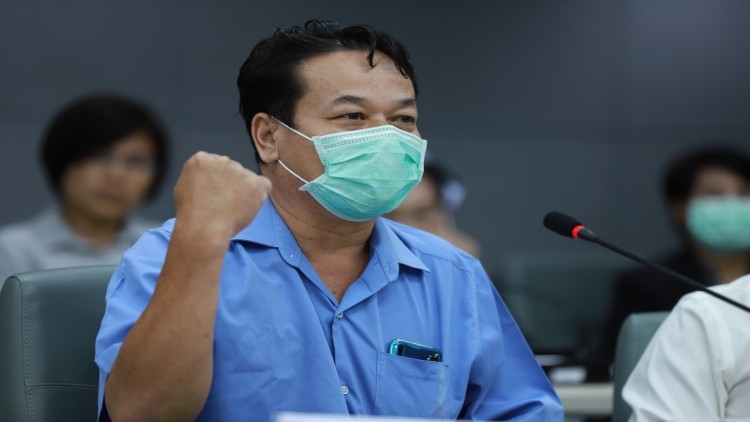 Coronavirus cases in Thailand remain at 32

Confirmed cases of coronavirus in Thailand remain at 32 persons – nine Thais and 23 Chinese – with 10 having returned home and 22 in hospital, while the condition of one Thai who returned from Wuhan, China, is normal, Public Health Ministry spokesman Dr Taweesin Visanuyothin said today (February 10).

The coronavirus surveillance programme has seen a total of 689 patients, 50 per cent Thai and the remaining 50 Chinese. Of these, 334 were allowed to go home, most having seasonal influenza.
The ministry found that the virus earlier spread in five areas – Region 1 in the upper North, Bangkok Metropolitan Region 4, Region 13 in Bangkok, Region 6 in the East and Region 11 in the upper South.
“According to a survey on demand for medical masks in more than 1,000 hospitals, we found that there are approximately one million masks in stock,” Taweesin said.
Meanwhile, the director of the department dealing with communicable diseases, Dr Sopon Iamsirithawon, said the number of Chinese tourists had declined due to a ban on them leaving the country and the closure of Chinese airports for more than 10 days. Therefore, there have been no new cases of Chinese tourists entering. The focus this week will be on monitoring high-risk groups to diagnosis and prevent any spread of infection to the Thai public.
Answering a question on blood donation from a taxi driver who recovered from the virus, Taweesin said a recent study of new disease treatments has shown that when healed, a person will become immune to the virus. They gain strong immunity after approximately two weeks and the best immunity after about four weeks or a month; after this, however, the immune system may gradually decrease. Therefore, the blood of a recovered person can be immediately extracted to obtain lymphatic cells that have immunity, or antibodies.
This is considered a better plan than medicine, since the immune system can catch pathogens, he added. This idea was taken from the time of SARS, when people who survived were asked for blood to be used to treat other cases, and during the Ebola era, when an American doctor was infected and received blood from an African boy who had recovered from the virus.
“We have heard that a medical team in China is currently working on this too. China has thousands of patients who have been healed using blood from recovered patients. For Thailand right now, there is only one taxi driver who has recovered. The rest are Chinese people returning to their country. In the Nakhon Pathom case, the elderly woman did not meet the criteria for blood donation because of her age – 73 – and heart disease,” Taweesin said.
“The amount of blood used is the same as normal blood donations. In the future, if more people recover, they may be requested to donate blood for studies. The blood of recovered patients can be injected into two others in a severe condition, with a 48-hour wait for lab results. However, it cannot be developed into a vaccine because of the decrease in condition brought on by the virus,” he added.