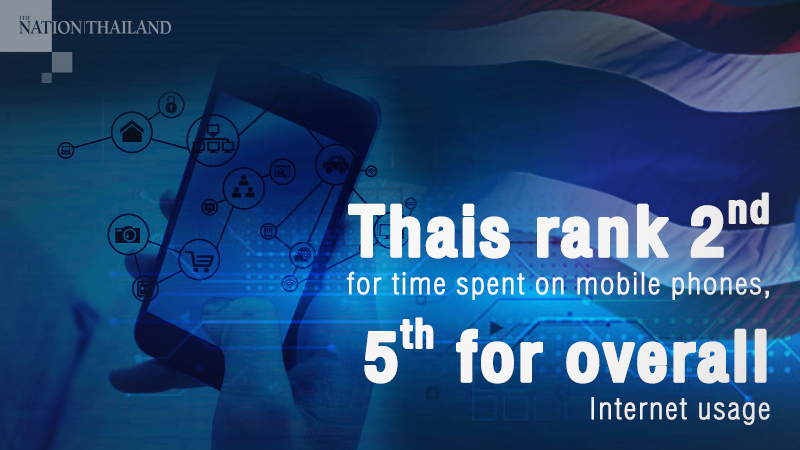 Thais ranked second globally for time spent on their mobile phones and fifth for the amount of time spent on the Internet, according to a report by “socially led creative agency” We Are Social. Filipinos were ranked number one for overall Web usage.

According to the agency, 75 per cent of Thailand’s over 60-million population use the Internet – higher than the global average of 59 per cent – while the rate of mobile phone use is as high as 134 per cent. These figures do not include those used with IoT (Internet of Things) devices, in which 97 per cent of the population, or 50.18 million people, use the Internet for 4 hours 57 minutes per day.

When taking into account Internet usage across all devices, Thais averaged 9 hours per day compared to the world average of 6 hours 43 minutes. At number one, Filipinos averaged 9 hours 45 minutes per day, followed by South Africans, Brazilians and Colombians.

Thailand saw the world’s second-highest daily Internet surfing rate via mobile phones, while most developed countries had a usage rate lower than the world average. For instance, people in Japan used the Internet on average for 4 hours 22 minutes per day, with mobile phone use averaging only 1 hour 32 minutes.

The report found that Thais spend an average of 2 hours 55 minutes per day on social media; 99 per cent of users also watched online videos. The most popular websites are Google, Facebook and YouTube.

The Thai websites with the most visitors are Pantip and Sanook. The majority of searches were for sports, entertainment and gambling such as “football”, “movies”, “lottery”, “football results”, “check lottery”, etc.

Thais use Facebook the most – 95 per cent of all Internet users – followed by YouTube (94 per cent), LINE (85 per cent), Instagram (65 per cent) and Twitter (55 per cent).
As for e-commerce, 90 per cent of Web users in Thailand have searched for products and services on the Internet. As much as 82 per cent, or about 34.8 million, have bought products online – 69 per cent via mobile phone, with online purchases amounting to $4.31 billion (Bt135.7 billion), including electronic items ($1.5 billion) and fashion and beauty products ($1.03 billion).

Up to 33 per cent used vehicle services via ride-hailing applications, with a market value of $682 million.

As much as 94 per cent of Thais own phones and smartphones, 50 per cent have PCs, 33 per cent tablets, 15 per cent smartwatches or smart wristbands, and 3.7 per cent smart home devices. Thailand has 400,000 smart homes with equipment worth $110 million, smart appliances worth $41 million, security systems valued at $25 million and $19 million of entertainment devices.

The report says that after taking into account all data, it can be concluded that Thailand has advanced to become a digital-based society.
Still, with easy access to digital devices and faster Internet speeds, the data reflects concerns that Thais are spending way too much time on the Internet and their mobile phones.