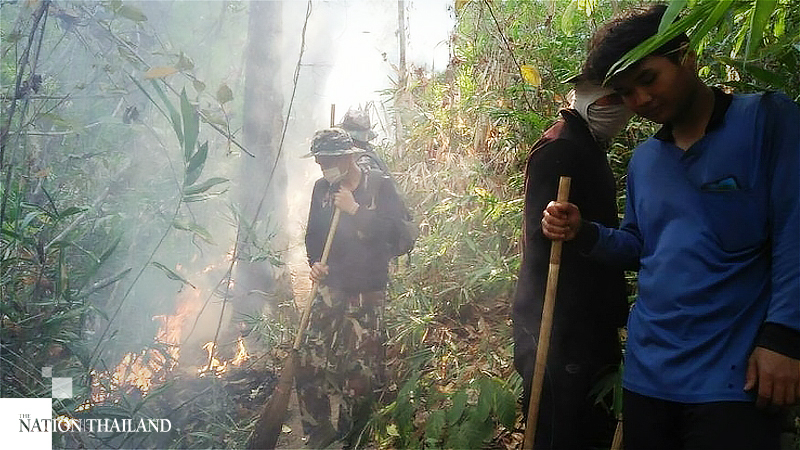 Soaring levels of PM2.5 air pollution fell slightly in the North on Thursday (April 9), after hotspots caused by fires in Chiang Mai province decreased by 50 per cent. Efforts to get the fires and pollution came at a tragic cost, however, when four men lost their lives fighting forest blazes.

On Thursday, the Department of Pollution Control (PCD) measured PM2.5 dust in the northern region at levels ranging between 32 to 241 micrograms per cubic metre (µg/m³).

The PCD’s so-called safe level for PM2.5 is 50µg/m³, while the global standard set by the World Health Organisation is 10µg/m³.

Meanwhile the Forest Fire and Smog Centre informed Minister of Natural Resources and Environment Warawut Silpa-archa on Wednesday that hotspots in Chiang Mai decreased by 50 per cent within 24 hours, from 674 to 336, after strict monitoring of forest fires.

It said 419 fires had been put out and 454 people had been prosecuted for setting them.

Four people were killed this week while fighting the fires in the North, according to Atthapon Charoenchansa, director-general of the Royal Forest Department. Their families have been granted compensation of Bt50,000 each by the Natural Resources and Environment Ministry.

They will also receive another Bt50,000 from the Forest and Marine Ranger Foundation. Warawut also offered the bereaved family members jobs in the Royal Forest Department or Department of National Parks, Wildlife and Plant Conservation.