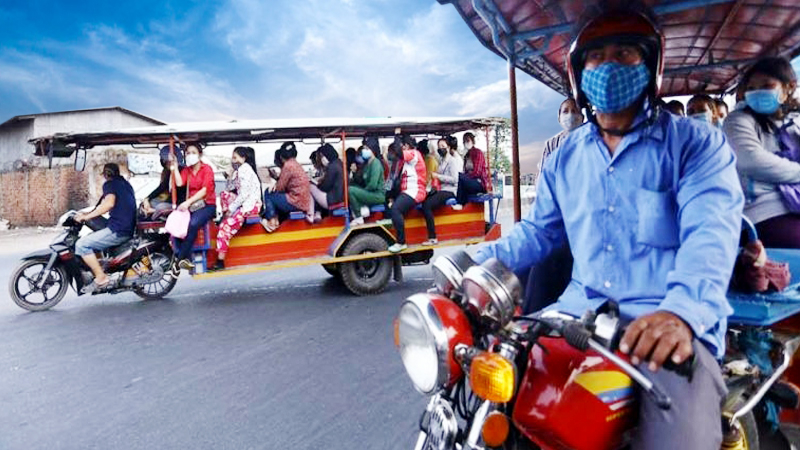 The government has ordered a lockdown of all district and provincial borders within the Kingdom from midnight on Thursday to midnight on April 16.

The public is not allowed to travel out of their districts or provinces to halt the spread of Covid-19 in light of the impending Khmer New Year. The only exception is Phnom Penh where no travel restriction is applied.

An executive order signed by Prime Minister Hun Sen said the lockdown does not apply to goods transportation by land, waterways and air, state vehicles and other means of transport used by officials on duty from all state institutions at national and sub-national levels.

It also does not affect vehicles used by members of the armed forces on duty, government and private ambulances, fire engines, waste collection trucks, or vehicles transporting workers to and from their workplaces with permits issued by the Ministry of Labour and Vocational Training.

The people’s urgent visits to hospitals or health centres are also exempted, but no more than four persons are allowed in each case.

The lockdown comes as the Kingdom’s Covid-19 tally tops 118 on Thursday. Of the number, 39 are women.

The latest case was found on Wednesday in a 30-year-old Chinese woman residing in Phnom Penh. She contracted the virus from another Chinese national who has since returned to China with his Vietnamese girlfriend, and is being treated at the Khmer-Soviet Friendship hospital.

On Thursday, the Ministry of Health reported the first case of relapse. It said the 40-year-old man from Phnom Penh’s Russey Keo district tested positive again 15 days after being discharged from the hospital.

Of the total 118 cases, 68, or 57.63 per cent, have recovered. Among them are a Chinese national, four British, a Belgian, 24 French nationals including a four-month-old baby, seven Malaysians and 31 Cambodians.

The latest patients who recovered on Wednesday are a 79-year-old Viking Cruise Journey passenger from the UK and five French tourists who tested positive while staying at a hotel in Sihanoukville.

The ministry’s Department of Communicable Disease Control (DCD) said most recovery cases are in Phnom Penh (13), Preah Sihanouk (24) and Kampong Cham (8), with the rest in 10 other provinces.

Ministry spokesperson Or Vandine declined to elaborate, saying more details would be provided in a press conference on Monday.

It said at present, there are no Rapid Diagnostic Tests approved for diagnosing Covid-19.

“IPC has been diligently testing and validating Covid-19 molecular testing kits that have been generously donated to Cambodia from countries all over the world, including China,” IPC said, adding that now NIPH is capable of doing Covid-19 test.

“IPC, along with NIPH, DCD/MoH [Ministry of Health], and all other stakeholders are committed and working tirelessly to help protect the Cambodian people against Covid-19,” it said.