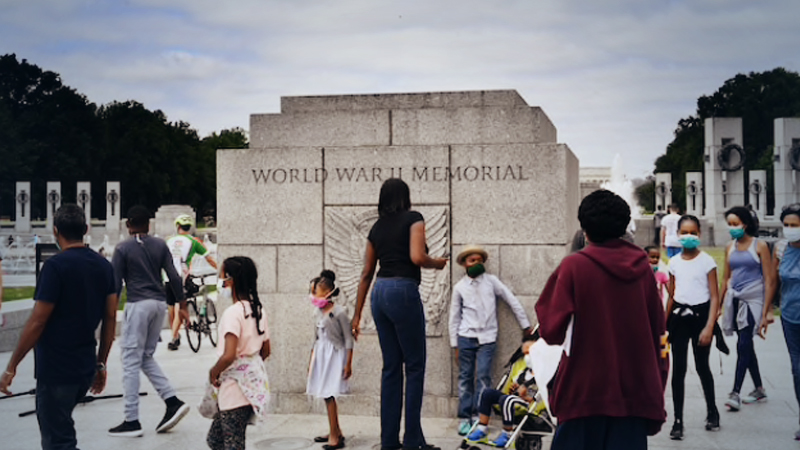 People gather at the World War II Memorial in Washington on Monday May 25, 2020 - Memorial Day. MUST CREDIT: Washington Post photo by Matt McClain

WASHINGTON - Kellan Kurfis crouched down and laid an American flag pin at the base of the Vietnam Veterans Memorial, below the name of the man who taught his grandfather to be a soldier.

The 9-year-old wore a black mask stretched over his mouth and nose; it was only the family's second outing this spring, and they were all being careful. But he wanted to come, because his grandfather could not be there this year.

Many Memorial Day commemorations were canceled because of the coronavirus pandemic or altered to comply with public health guidelines. Arlington National Cemetery was closed to all but family members. As the U.S. death toll from covid-19 neared 100,000 Monday, the cemetery live-streamed President Donald Trump, Vice President Mike Pence and other leaders participating in a wreath-laying ceremony at the Tomb of the Unknowns. The National WWI Museum and Memorial in Kansas City, Missouri, streamed its bell-tolling ceremony and other events online. There were prayers delivered on Facebook and video tributes to the fallen shared on Twitter.

But in Washington, with its iconic memorials, such as The Wall listing the names of more than 58,000 people who died for their country during the Vietnam War, many came to remember - in person.

For some, the pandemic served to crystallize the idea of shared sacrifice and the weight of all those losses.

At The Wall, they found and traced the engraved names of loved ones with tentative fingers, laid roses, and left handwritten notes and maps of Vietnam and folded flags and a can of Bud Light. "I miss you Daddy," someone wrote on a black-and-white photo of a burly man holding a tiny girl. A veteran found the name he sought on The Wall with his gnarled hand, choked out a swear and burst into tears.

"We have to come," said Rob Wilkins, retired from the U.S. Air Force and president of Rolling Thunder Washington D.C. "It was never a question."

He was thinking of those who died as he looked at The Wall, mask in hand. "Black, white, Asian, tall, short, it didn't matter," he said. "They were American, and they wanted to defend our freedom."

Wilkins found the name of his cousin George Washington Froe, killed when he was 20 years old. "We like to touch The Wall, say their name, so people understand," he said. "We didn't forget."

A sign directed people to a single entrance to encourage social distancing, but visitors still clustered, looking for names, sharing stories, hugging those moved to tears.

At the National World War II Memorial, a sign reminded people to "keep your distance to slow the spread of covid-19." But the grounds were busy with people cooling their feet in the fountain, shading their eyes from the sun as a helicopter thundered overhead with the Washington Monument just beyond. Some turned away, reluctantly, when they saw the crowds.

Maria Garcia sat alone in the shade on one of the stone benches at the memorial. "Today I felt compelled to come," she said. She was not there to remember a family member but to honor all those who served. Born in Mexico, raised in Texas, she now works on Capitol Hill, and she said weeks of isolation have given everyone time to reflect. Being at the memorial made her feel gratitude "for what other people have given up for us," she said. "All the freedom that we have is because of their sacrifice."

Christopher Barrow, 57, was thinking of his relatives who fought for Britain and of those who served as Allies, and remembering playing as a child in Birmingham, England, in a bomb crater left from the Blitz.

Maureen Gibbons tried to go to Arlington National Cemetery to mourn her husband, but traffic from the president's motorcade snarled the nearby roads too much. Her son John Gibbons kept apologizing, she said, when they had to turn away. At the World War II Memorial she kept her pink-and-white-flowered mask on and kept her distance from others. At her age, 78, she said, she has to be careful. Her daughter-in-law Bonnie Gibbons joined them after taking photos of the memorial, thinking of all the places her father had fought for the Navy, such as Midway and Okinawa. He had three brothers who fought in the war as well, she said, "but they all came home."

Aimee Mathews-Kurfis' father served as a paratrooper in the Army in Vietnam - in Charlie Company, 2nd Battalion, 503rd Airborne Infantry, 173rd Airborne Brigade (Separate) - and every time he comes to Washington from his home in Florida, she said, he makes sure to visit The Wall at least once and find the name Bruce E. Deerinwater. He's a quiet man, she said, and never talks much about Vietnam. But he told them it was Deerinwater who taught him to be a point man, taught the lessons that helped him survive.

She and her husband, Scott, and sons, Liam and Kellan Kurfis, came from Alexandria to honor that.

It was Kellan's idea to come. "I thought maybe we were doing something nice for him," he said, "to show him that we love him and care for him . . . and remember how he fought in the war for us."

As people passed by, their family stood still, wrapped in masks, looking at the name.

"It's serene," she said. "It puts things in perspective, for sure."