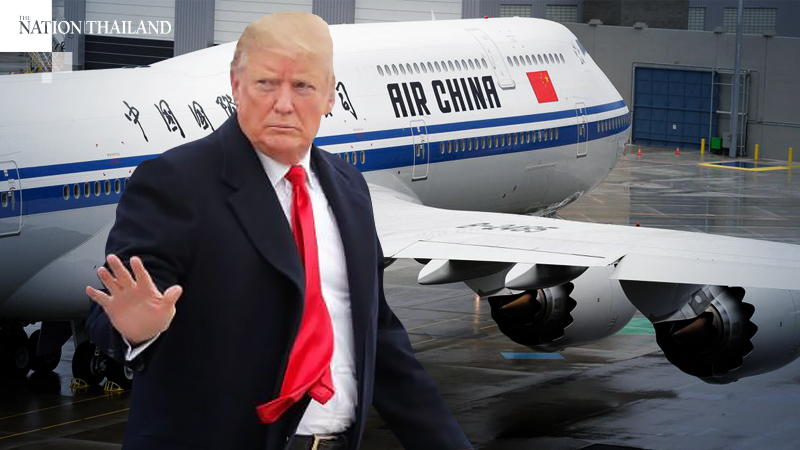 WASHINGTON - In a move likely to further inflame tensions between the United States and China, the Trump administration said Wednesday it will ban all commercial passenger flights by Chinese carriers beginning later this month.

The change, announced by the Department of Transportation and beginning June 16, is in response to China's refusal to allow U.S. carriers to resume service to China.

The rule would impact operations of seven carriers, including Air China and China Eastern Airlines. The department noted in its rule filing that the ban could take effect sooner at President Donald Trump's discretion. Still, the June 16 date does give the two sides some time to iron out their differences and avert a ban.

U.S. carriers had halted flights to the region in the wake of State Department advisories cautioning against travel to the region and restrictions imposed by the Trump administration that barred most non-U. S. citizens from entering the United States from China because of concern about the spread of the novel coronavirus.

Delta and United airlines, however, had hoped to resume flights to China in early June, but U.S. officials said rules imposed by Chinese authorities effectively prevent them from doing so. The Transportation Department's order does not impact cargo operations between the two countries.

"Our overriding goal is not the perpetuation of this situation, but rather an improved environment wherein the carriers of both parties will be able to exercise fully their bilateral rights," the rule says. "Should the [Civil Aviation Authority of China] adjust its policies to bring about the necessary improved situation for U.S. carriers, the Department is fully prepared to revisit the action it has announced in this order."

A representative of state-owned Air China, the nation's flagship carrier, declined to comment on the potential hardship to the company or would-be passengers, or on how the two sides might resolve the impasse.

This latest dust-up is just one of several ongoing disputes between the two countries. Trump has blasted China for not upholding its end of a trade agreement signed in January, in which Chinese officials pledged to increase purchase of U.S. goods by $200 billion over the next two years. The president also has criticized China for its handling of the coronavirus pandemic, and Chinese officials have similarly slammed the U.S. response.

Added Katherine Estep, a spokeswoman for Airlines for America, an industry trade group: "We believe DOT's order will ensure fair and equal opportunity for passenger airlines with respect to service to and from China. We hope that this process will protect the rights afforded to U.S. carriers under the current U.S.-China Air Transport Agreement."

U.S. officials also said they would crack down on potentially deceptive practices by Chinese carriers, who "may be using passenger charter operations as a way of circumventing" Chinese government limits on scheduled flights and gaining the upper hand on U.S. competitors.

Applications by Chinese carriers to run charter flights "may not have accurately reflected the true nature of the services involved," the Transportation Department said in its notice Wednesday, noting that it will now examine such applications with "the highest degree of scrutiny."

Chinese carriers have faced allegations that they applied to run numerous "repatriation" charter flights and ended up charging exorbitant fares and disadvantaging U.S. carriers in the process.

In the month before the Trump administration banned most non-U.S. citizens from entering the United States from China, American and Chinese carriers operated roughly 325 weekly flights between the two countries. By mid-February the number of flights had dropped to only about 20 weekly scheduled flights - all flown by Chinese airlines.

In late March, the Civil Aviation Administration of China or the Civil Aviation Authority of China, as it was referred to in USDOT's order, issued a notice that limited Chinese and other foreign airlines to one weekly scheduled passenger flight on one route to any given country. The move was seen as an attempt by officials to insulate the country from further exposure to cases of covid-19 from those outside of China.

But the notice also said that carriers could note exceed the same number of scheduled flights they had operated as of March 12.

Since no U.S. airlines were flying to China as of that date, the notice effectively prevented them from resuming service, something not allowed under a 1980 agreement between the two countries on civil aviation operations.

"In establishing an arbitrary 'baseline' date of March 12, 2020, as well as the other restrictions cited above, the CAAC Notice effectively precludes U.S. carriers from reinstating scheduled passenger flights to and from China and operating to the full extent of their bilateral rights," while Chinese carriers can maintain their service, the Transportation Department's notice said.

Chinese officials said on May 25 that their actions did not violate the 1980 agreement since they "equally apply to all domestic and foreign carriers, being fair, equal and transparent." The officials urged the U.S. government to revoke the order.

If the current dispute is not resolved and no direct flights are permitted between the U.S. and China, options for travel would be narrowed even further, but would still exist. Many travelers have long relied on connecting flights, for example, and that could still be done in some cases.

But restrictions imposed by both the U.S. and China on who can travel between the countries have also cut demand for flights, and it's unclear when that will change.

In addition to the restrictions imposed by the Trump administration, Chinese authorities also imposed restrictions at the end of March that barred foreigners with visas and residence permits from entering China. Exceptions may be allowed for some travel involving business, scientific or other purposes.

U.S. officials noted that Americans who are allowed into China face far-reaching restrictions.

"All U.S. citizens who enter China will be screened upon arrival and be subject to a 14-day quarantine. All arrivals should be prepared to complete quarantine at a government selected facility or hotel at their own expense, even if they maintain a residence in China or are traveling domestically," according to a U.S. consular health alert. "U.S. citizens may also be required to install and use location tracking software on their phones to access public spaces and some businesses. Some private hospitals may refuse admittance to travelers who have been in the United States 14 days before entering China."