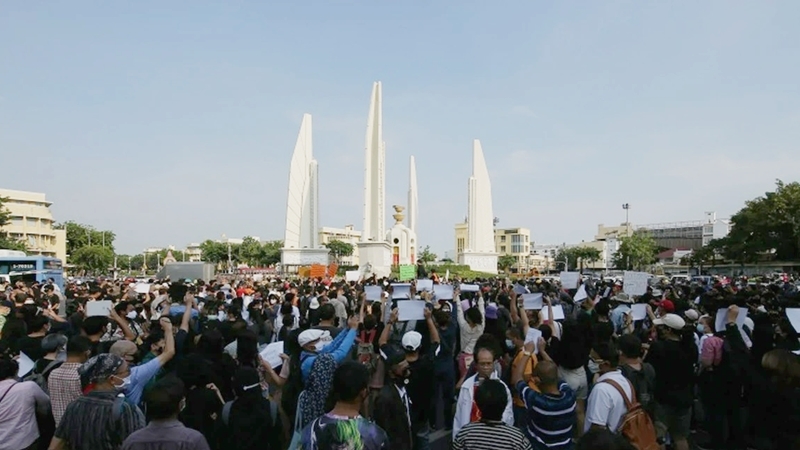 Free Youth, a political non-governmental organisation, on Saturday (July 18) organised a gathering of about 1,000 people to protest against the government, which they accused of being ineffective and depriving people of their rights and freedom.

The preparations for Saturday evening's gathering started at 8am and the protesters, led by Free Youth and the Student Union of Thailand, began arriving at 4pm at Democracy Monument.

They demanded that the government stop threatening people, dissolve Parliament and rewrite the Constitution as they were inefficient in governing the country.

The protest leaders, such as Free Youth secretary-general Tattep Ruangprapaikitseree, and Anon Nampa, a human rights lawyer and pro-democracy activist, also gave speeches criticising the government on several issues, including the recent incident involving an Egyptian soldier who was found positive for Covid-19 after he had left the country.

They said initially that the protest would continue until Sunday morning and gave the government a deadline of two weeks to respond to their demands or they would intensify their protests.

Policemen from the Metropolitan Police Bureau were sent to secure the area while the bureau commissioner, Pol Lt-General Phakkhaphong Phongphetra, said the protest was "illegal" as they did not have permission and they had violated the provisions of the emergency decree.

At 9.30pm, there was one violent incident when a man came up to the protesters, which resulted in a conflict, leaving the man with an injury on the head. He reportedly came to observe security cameras in the area and the protesters questioned him about his motives before it erupted in violence.

Another disturbance happened when people saw the authorities trying to take a couple of protesters away for investigation for allegedly undermining the Royal Family. Other protesters came to their rescue and prevented them from being taken away.

Due to concerns of further conflicts, the protest leaders decided to cancel the plan to continue the protest until Sunday morning as originally planned.

Before midnight, the leaders asked the protesters to disperse for their own safety. They also confirmed on the Free Youth Facebook page that they were all safe. The youth vowed to continue their fight for democracy, and reiterated their demand that Prime Minister Prayut Chan-o-cha dissolve Parliament in 14 days. They also demanded that the government stop threatening people and allow the writing of a new Constitution. Free Youth said on its Facebook page that some skirmishes happened during the protest on Saturday, as police were trying to take some protesters away to a police station.