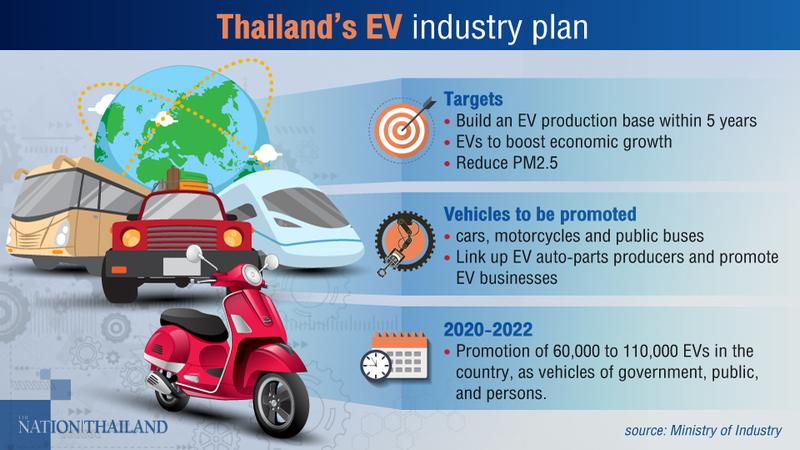 The Electric Vehicle Association of Thailand (EVAT) says the EV market in Thailand is the most advanced among Asean countries and will grow quickly during 2025 to 2030.

EVAT chairman Yossapong Laoonual said several of the association’s requirements for the EV industry have been adopted by the government. However, EV investment and production have moved slowly due to high operating costs.
EV technology will be cheaper from 2025 and become more accessible to normal people, he predicted.
He added that the EV industry in Thailand was more advanced than in Malaysia, Indonesia or Vietnam, since Thai producers were already up and running. Also, foreign auto companies were interested in investing in EV production in Thailand since it has long been a production base for normal cars.
The EVAT chairman suggested the government should use environmental policies to push EV use in the country, such as by promoting of Euro 5 and 6 emission standards, which are set to be adopted in Thailand over the next few years.
EVs will be cheaper than other Euro 6 cars in the next five years, while promoting the Euro 5 and 6 standards would boost EV sales in the future, he said.
The association is collaborating with other private agencies to promote EVs in Thailand. Next month, EVAT will join hands with Informa Markets to launch Asean Sustainable Energy Week 2020 from September 23 to 26, highlighted by the “International Electric Vehicle Technology Conference and Exhibition”.
Meanwhile, the national EV policy committee has approved plans to make Thailand a production base for EVs within five years. By 2030, 30 per cent of all vehicles produced in Thailand will be EV.