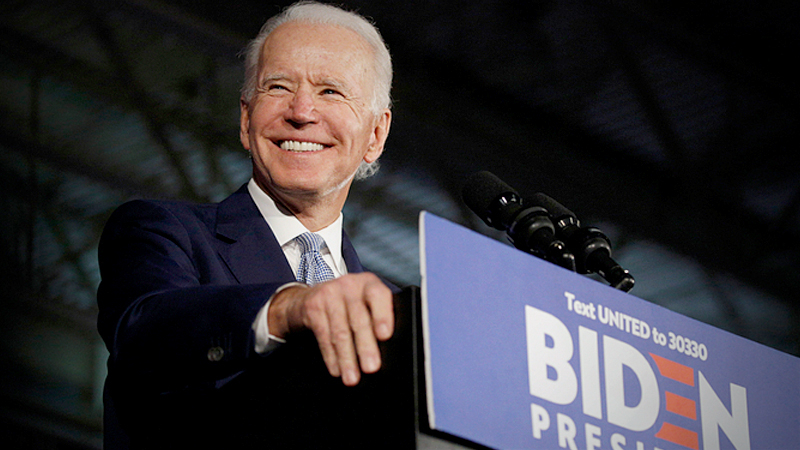 The security guard blurted 'I love you' to Joe Biden in an elevator. One viral video later, she nominated him for president.

WILMINGTON, Del. - She was last seen blurting "I love you" to Joe Biden as she escorted him in an elevator to an editorial board meeting at the New York Times last December, part of an exchange that went viral as the Biden campaign cast her adulation as a bigger deal than the news organization's endorsement, which he lost.

On Tuesday night, Jacquelyn Brittany, a 31-year-old African American security guard, did something else for Biden: she became the first person to put his name into nomination for president. Her role was first disclosed by The Washington Post.

Jacquelyn epitomized for the Biden campaign the dynamics of the primaries: The hopes of Biden, who was spurned by others, rested on Black women and working-class voters, who would eventually resurrect his campaign.

On Tuesday, she praised Biden as "my friend."

"I take powerful people up my elevator all the time," said Jacquelyn, who requested that The Post identify her by her first and middle name, Brittany. "In the short time I spent with Joe Biden, I could tell he really saw me."

"I knew, even when he went into his important meeting, he'd take my story with him," she said.

As others have on the first two nights of the convention, she contrasted her view of Biden with Trump.

"Joe Biden has room in his heart for more than just himself," she said.

In an interview with The Post before her nomination remarks, Jacquelyn said she has followed Biden since he became Barack Obama's running mate. "I just like Joe. I've always liked him," she said.

She said she finds inspiration in his life story and the tragedies he has endured - the deaths of his first wife and daughter in a December 1972 car accident and of his son to brain cancer in May 2015.

"He's been through so much. And he doesn't show it on the outside. He may feel it on the inside - and I'm that type of person," she said, adding that her outward cheer masks a difficult life, including stints in foster care as a child.

Jacquelyn said she had not realized that she was going to be filmed for the episode of the Times' cable show, The Weekly, which included Biden's visit to the news organization. But in December, before Biden arrived for his interview, she chatted with an aide and revealed that she was thrilled to be escorting him upstairs.

"Once he came in, he was just genuinely, genuinely nice to people. We don't get that from everybody," Jacquelyn said.

For most of the elevator ride, Jacquelyn was silent - she does not speak to guests she is escorting unless they first speak to her - but her mind was racing. "I kept thinking to myself, this was a person I want to lead the country," she said, adding that she was thinking it could be her only chance to talk with him.

The aide prompted her, suggesting that she say something to the former vice president. Jacquelyn turned to look at Biden, and he smiled at her and said "Hi," she recalled.

"That was my time," she remembered thinking.

Biden thanked her and asked if she had a camera, and the two posed for a selfie that he took with her phone. As Biden took the photo, she said, she suddenly realized that the exchange had been caught on video.

Two of Biden's primary foes got the Times' endorsement - Sens. Elizabeth Warren, D-Mass., and Amy Klobuchar, D-Minn. But when asked about that snub, Biden seized on his moment with Jacquelyn: "I got something better. I got to meet Jacquelyn," he said in Waukee, Iowa.

Jacquelyn said she has bristled at online commentary suggesting that she was merely star-struck by Biden in the moment. A week earlier, she said, she had escorted Oprah Winfrey into the building and had not made a big show of that.

She said that she has never escorted President Donald Trump and does not want to.

Jacquelyn has watched other Democratic conventions, and she said the idea of nominating Biden is "overwhelming."