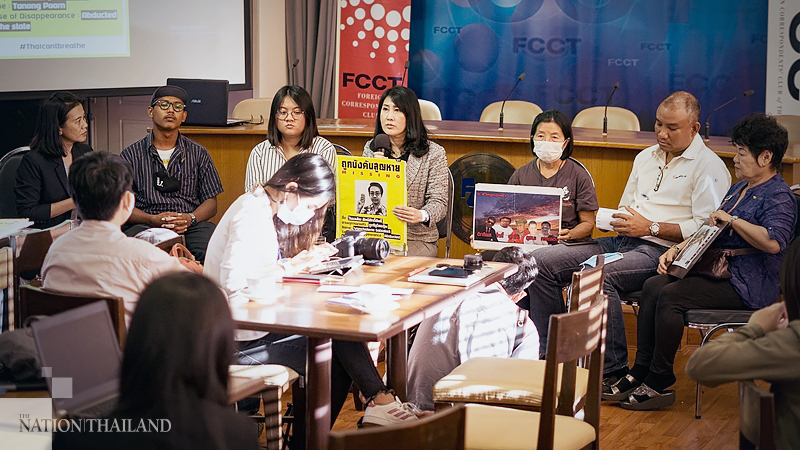 The families of victims of enforced disappearance gathered on August 27 to demand that the government reveal the truth behind the disappearances, and arrest the culprits.

They also called for passing new torture and enforced disappearance law, and presented four proposals to prevent their recurrence.
The Foreign Correspondents' Club of Thailand, Amnesty International, Cross Cultural Foundation, Thai Lawyers for Human Rights, Union for Civil Liberty and Human Rights Lawyers' Association helped organise the gathering to commemorate International Day of the Victims of Enforced Disappearances on August 30.
Adisorn Pho-an, whose labour leader father Tanong Pho-an was allegedly abducted for opposing the National Peace Keeping Council's decision to scrap labour unions in 1994, said that after his disappearance he realised how the Army could easily abduct and kill people citing national security reasons.
Jutatip Sirikhan said that her grandfather, Tieng Sirikhan, was abducted and killed when she was young and she could not understand the notion of enforced disappearance until political activist Wanchalearm Satsaksit was abducted in Cambodia recently.
She later focused on this subject and learned that the government had undermined Tieng’s history of protesting against the military government during World War II.
She vowed to dedicate herself to the cause so that no one was abducted due to political differences, and "we could create a society with equality".
This December will mark the second anniversary of the disappearance of Surachai Danwattananusorn, better known as Surachai Saedan. He was an opponent of the coup.

His wife, Pranee Danwattananusorn, said that his abduction was a serious violation of human rights, as expression of a political viewpoint was not a crime.
She hoped that the proposed new torture and enforced disappearance law would solve the problem and victims' families get relief, because the number of enforced disappearance cases was not getting better.
“Surachai was not guilty of the charges of disrupting an Asean meeting in Pattaya. But the government officials still accused him and seized his right to seek asylum in other countries. I had to pay Bt500,000 but I could not sue them back after evidence that he was injured to death was gone. I want the law to have more humanity."
Wanchalearm Satsaksit’s sister Sitanan Satsaksit said that both the Thai and Cambodian governments could not clarify the case of her brother's disappearance on June 4, and he was not the first.
“Thai people should be educated about the torture and enforced disappearance law. It would be a relief to know that similar cases would be followed up in the future,” she said.
Siam Theerawut is one of three exiled activists who are missing after being extradited from Vietnam.
Siam's mother Kanya Theerawut said that she felt excruciating every minute that she thought about her son and wondered whether those who abducted him saw him as a human.
“I don’t understand why he had to run away from his country for playing a role in a theatre,” she said. Siam was charged with violating the lese majeste law that prohibits any kind of undermining of the monarchy after he gave a performance in a period comedy play “The Wolf Bride”.
Kittithat Sueree, a representative from Thai southern borders, said that the government had misinformed the media about the insurgency situation and intimidated those who contradicted their statements, as a result local youth had to leave their homes to study elsewhere.
“The southern borders have the most number of cases of enforced disappearance. One of them was my school senior whose wife and child are still waiting for him."
Sanhwan Srisod, a legal adviser to the International Commission of Jurists, said the torture and enforced disappearance law had faced struggles for 12 years.
“The current draft makes torture and enforced disappearance a crime. The offender, the accomplice, the collaborator and the operator are all guilty. The DSI [the Department of Special Investigation] will be responsible for the case except that if the DSI is a suspect, the police will fill the gap. Moreover, the draft has suggested the establishment of a committee to ameliorate the victims’ families and stated that every organisation that controls or limits a person’s freedom had to collect sufficient information and the court could force the government organisation to reveal the information if the victim’s family complained.”
She also noticed that the government’s draft did not follow international convention, such as the unspecified definition of enforced disappearance and the involvement of military courts.
Somchai Homlaor, an adviser to Cross Cultural Foundation, said the people’s draft would hasten the government to draft their own version but several cases were allegedly done by the officials.
“If Thailand becomes more democratic, people will come out and demand justice more than before,” he said.
Sunai Phasuk, adviser to Human Rights Watch, said the government had promised the international community that they would prevent enforced disappearance, but they had not honoured their commitment.
“The government’s draft doesn’t correspond to international regulations and it should not be encouraged. Thai people should support the public draft to enter the House so that the new law is in line with international standard,” he said.
Angkhana Neelapaijit, former member of the National Human Rights Commission and the wife of disappeared human rights lawyer Somchai Neelaphaijit, said that countless liars had diminished the public's confidence in the law and the government.
She mentioned three government measures in past years that had led to cases of enforced disappearance -- the communist suppression, public suppression during Black May, and drug traffic suppression in the southern borders.
“The draft will be sent to the House but it will be considered by senators appointed by the National Council for Peace and Order from the military regime,” she said, adding that the senators would be an obstacle to improve the legal system on human rights.
“The United Nations reported in June that there were 87 enforced disappearance cases, but the government still denied it.”