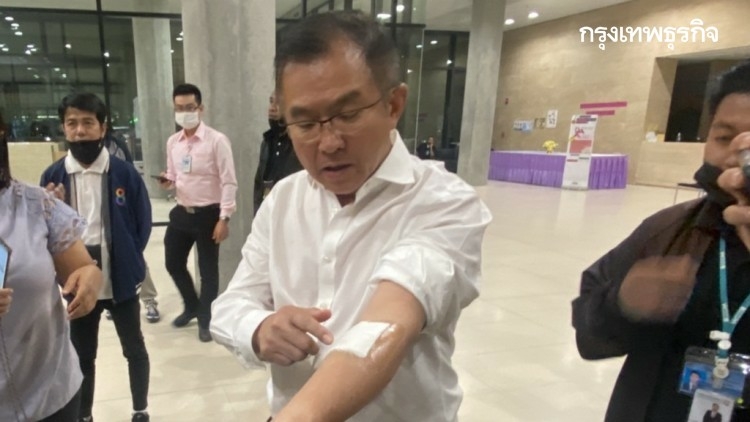 Pheu Thai Party MP Visan Techatirawat slashed himself with a knife in Parliament on Tuesday, in what he said was a protest against the treatment of young pro-democracy activists.

Visan cut his left hand and arm three times with a fruit knife during day two of the special debate on the political crisis, explaining later that he did not want the students to have to shed their blood.

For the past four months, pro-democracy rallies in Bangkok and other provinces have called for PM Prayut Chan-o-cha to quit, the constitution to be made more democratic, and the monarchy to be reformed.

He added that he had been an MP since 1986 but had still not figured out how to solve the political problem and he did not want to see the unrest turn bloody.

Other lawmakers reacted with shock and dismay as Visan slashed himself in the chamber.

Parliament President Chuan Leekpai called on medical staff to apply first aid, before Visan was taken to hospital for treatment.

He later apologised to MPs for the shock caused by his action.

He explained he had acted in this way in protest against the crackdown on a on a peaceful rally in Bangkok on October 17, when police fired water cannon filled with chemical irritant at protesters. He said PM Prayut should be listening to protesters’ demands rather than using force against them.

He added that he had borrowed the knife from a maid at Parliament and had not told his family about the plan to cut himself.