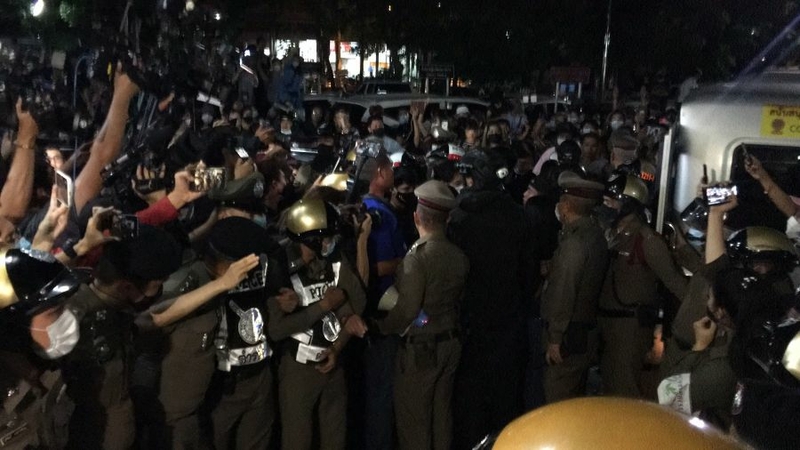 Non-profit organisation iLaw has questioned the decision of the police to detain three pro-democracy protest leaders who had been freed by the court on Friday.

In a post on its Facebook page on Saturday, iLaw said that according to Section 68 of the Criminal Code, once a suspect is arrested, the arrest warrant is no longer valid for further use.

“In case the suspect is released or runs away after the arrest, police officers would need to request a new arrest warrant from the court,” it said.

iLaw was referring to the incident of four pro-democracy protest leaders -- Parit "Penguin" Chiwarak, Panusaya “Rung” Sithijirawattanakul, Panupong “Mike” Jadnok and Patiwat “Bank” Saraiyam -- being freed on Friday evening after the Criminal Court declined to grant a third request by police to detain them for further interrogation.

“Penguin, Rung and Mike have multiple warrants for taking part in rallies in several provinces, including Nonthaburi, Roi Et and Ayutthaya. However, they had already been arrested and detained at Thanya Buri Prison in Pathum Thani,” it said. “Their lawyers have coordinated with police officers in all areas where they have arrest warrants to make sure they would not be detained again after release, as the suspects had already completed all the legal processes including being notified of the charges, interrogation and recording their fingerprints.”

On Friday night, when Parit, Panusaya and Panupong were released from prison, police transported them to Prachacheun Police Station instead, citing that the three still have pending arrest warrants and would need to be detained and later brought to Ayutthaya Police Station.

“Their lawyers tried to explain to the police that since the three had already been arrested and interrogated by the police, their arrest warrants should no longer be in effect.

“Police should have no power to detain them as they have no arrest warrants,” said iLaw.