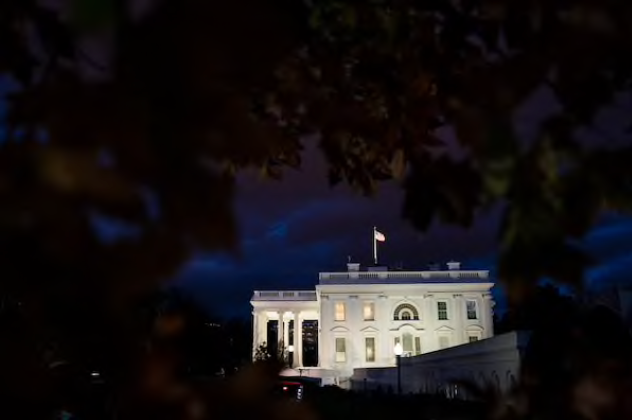 The sun sets on the White House on Tuesday Nov. 17, 2020, in Washington, D.C. MUST CREDIT: Washington Post photo by Jabin Botsford

The Pennsylvania Supreme Court dismissed with prejudice a Republican lawsuit seeking to invalidate more than 2.5 million votes cast by mail in the general election, the latest in a string of legal defeats for the GOP as President Donald Trump fails to undo his losses in key battleground states.

Justices on the state high court ruled unanimously late Saturday that Republican petitioners waited too long to file their suit challenging Act 77, the 2019 law that established universal mail voting in Pennsylvania. Trump allies had asked the court to invalidate all votes cast by mail in the most recent election or direct the majority-Republican legislature to choose a slate of presidential electors.

The court's written order called the latter option "extraordinary," noting that it would disenfranchise 6.9 million voters.

"The want of due diligence demonstrated in this matter is unmistakable," the justices wrote, noting that the lawsuit was filed "more than one year" after no-excuse mail voting was enacted in Pennsylvania. The order blamed petitioners for a "complete failure to act with due diligence in commencing their facial constitutional challenge, which was ascertainable upon Act 77's enactment."

Concurring, Justice David Wecht noted that the GOP petitioners "failed to allege that even a single mail-in ballot was fraudulently cast or counted."

Legal experts had predicted little chance of success for the suit, which also sought to block certification of election results. Trump and his allies have gained no substantive traction across more than two dozen cases trying to undermine President-elect Joe Biden's win since Election Day.

The ruling followed a procedural setback for the petitioners on Wednesday, when a temporary order blocking further certification of election results was stayed on appeal from state officials who had already formalized Biden's win the previous day. The state asked the Pennsylvania Supreme Court to exercise extraordinary jurisdiction in the case, a request it granted as part of Saturday night's order.

In a separate blow to Trump, the U.S. Court of Appeals for the 3rd Circuit on Friday rejected his request for an emergency injunction to overturn the certification of Pennsylvania's election results. The lawsuit claimed Republicans were illegally disadvantaged because some Democratic-leaning counties in the state allowed voters to correct administrative errors on their mail ballots.

The 3rd Circuit said the case had "no merit" in a scathing opinion written by Judge Stephanos Bibas, who was appointed to the court by Trump.

Trump attorney Jenna Ellis said in an interview with OAN on Saturday that the team is still weighing its options for bringing a Pennsylvania case to the U.S. Supreme Court.

"This has become a ridiculous political game," she wrote, adding that the post-election litigation represents a "fight for the very integrity of our entire system."