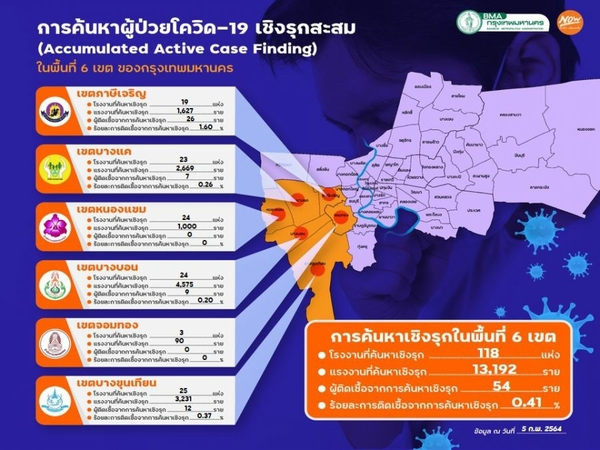 The Bangkok Metropolitan Administration (BMA) on Saturday reported that 54 cases of Covid-19 had been found after proactive testing at 118 factories in six districts that carry high risk of Covid-19 infection.

Thailand has seen thousands of cases in the second wave since December 2020.

“As of February 5, public health officials have found 54 infected persons from active case finding at 118 factories in Phasi Charoen, Bang Khae, Nong Khaem, Bang Bon, Jomthong and Bang Khun Thian districts, from a total of 13,192 persons who were tested,” said the BMA.

“All the patients have been sent to hospitals for treatment while their close contacts have been traced, tested and placed in quarantine to monitor the symptoms.”

The BMA also added that it had urged factory owners to regularly clean and disinfect communal areas and contact surfaces in their facilities such as doorknobs, tables, chairs and toilets.

“People should continue to strictly follow preventive measures against Covid-19, including wearing face masks in public, washing their hands regularly, and avoiding crowded spaces until the situation improves,” it added.

From December 18 to February 5, Bangkok has reported a total of 820 cases, making it the province with the second highest cases following Samut Sakhon, the hotspot of the latest outbreak, which has seen 14,082 patients. Chonburi is third with 649 patients and Rayong is fourth with 580.