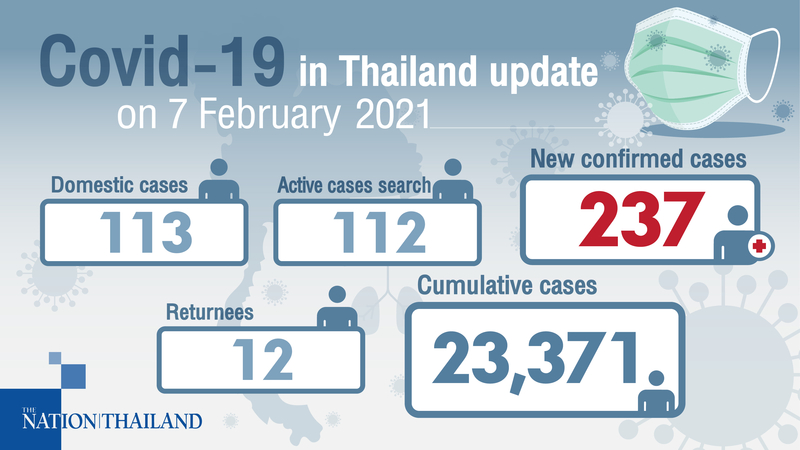 The Centre for Covid-19 Situation Administration (CCSA) on Sunday reported 237 new cases, of whom 12 are overseas travellers in quarantine facilities.

Of the 113 exposed to the disease while visiting high-risk areas, Samut Sakhon leads the list with 95 cases, followed by 14 in Bangkok and three in Tak.

Meanwhile, proactive testing led to the discovery of 112 cases, most of them in Samut Sakhon 107, followed by Bangkok 3 and Tak 2.

Of the cases in quarantine centres, five are Thais returning from Germany, Maldives and Myanmar. Foreigners include a Sri Lankan citizen from Singapore, an Irish national from France, two Britons, an Italian, a Pakistani and a Japanese, who flew in from their respective countries.

Meanwhile, 668 patients have recovered and been discharged.

CCSA assistant spokesperson Panprapa Yongtrakul said intensive case finding will continue with around 10,000 people tested per day and assessed through February even if the number continues to decrease. She added that this operation would continue until health security is ensured. More than 150,000 people in Samut Sakhon have entered the screening process.