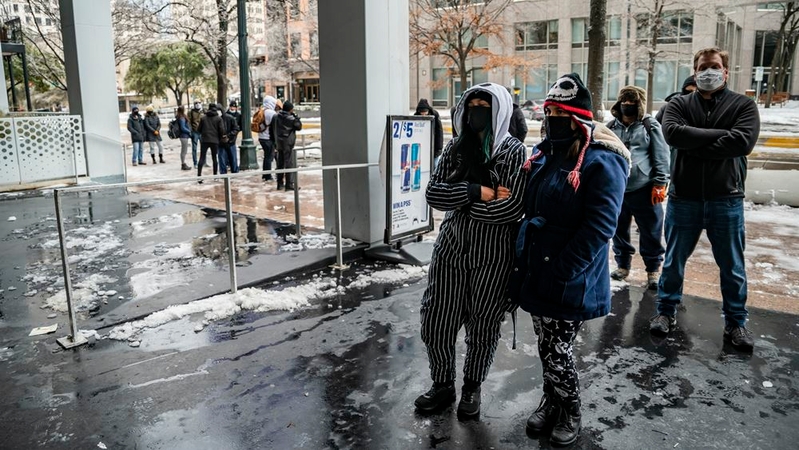 People wait in line outside a 7-Eleven store in Austin, Texas, on Wednesday, Feb. 17, 2021. MUST CREDIT: Photo for The Washington Post by Sergio Flores

With millions of Texans grappling with water restrictions, spiking energy bills and other havoc left behind by last week's winter storm, White House officials said Sunday that President Joe Biden is "eager" to visit and could head there as soon as this week.

The majority of the 58 deaths linked to the Arctic outbreak have occurred in Texas, according to tracking by The Washington Post. As of noon Sunday, more than 11 million Texans were under orders to boil tap water before drinking it and another 120,000 were without any water at all because public water utilities remained hindered, according to figures from the Texas Commission on Environmental Quality.

Many in the state were being hit with extraordinarily high utility bills - many times higher than normal - with experts blaming the state's lightly regulated energy markets for the prices, which spiked when the storm caused shortages.

"He is eager to go down to Texas and show his support," White House press secretary Jen Psaki said Sunday on ABC News's "This Week." "But he's also very mindful of the fact that it's not a light footprint for a president to travel to a disaster area. He does not want to take away resources or attention.

The wholesale price of electricity in Texas spiked more than 10,000%, leaving many with dizzying bills ranging from four digits to more than $17,000.

Three generations of Texans were trying to stay warm in the blackout. Then a deadly fire erupted in a fully occupied hotel in Texas late Friday, raging for several hours while the sprinkler system was disabled by frozen pipes.

Biden is taking a notably low-key approach to the storm relief process. It's a marked contrast to predecessor Donald Trump's habit of making himself the often-hostile center of attention during natural disasters.

Texas is clawing its way out of crisis mode as temperatures rise and the ice begins to thaw. Photographers captured the slick streets, grocery store lines and distribution events that partly defined the alarming week.

"We certainly would welcome him," Turner said on CBS News's "Face the Nation," adding: "He would not be a distraction, neither a burden."

The storm, which has killed people in at least eight states, also knocked out power for millions in brutally cold weather. Many of those initially considered fortunate because their lights stayed on are now facing jaw-dropping electric bills because they had opted for one of the state's increasingly popular variable-rate plans.

Such electricity plans offer a potentially lower-cost alternative to traditional fixed-rate energy payments, but in a crisis situation can saddle customers with outsize bills. As wholesale energy prices soared, some have charged thousands of dollars for a few days of power.

One company, Griddy, said it was forced to raise its prices as much as 300 times the normal wholesale rate, meaning a typical $2-a-day household would face more than $600 in daily charges.

The spike in prices left many Texans with dizzying bills in the wake of the storms - ranging from four digits to more than $17,000.

"We are about to see a wave of bankruptcies, foreclosures, and evictions as these bills hit consumer and retailer mailboxes," said Robert McCullough, a consultant and former utilities executive who has testified before Congress.

McCullough noted that electric companies are profiting from the price spikes. Those serving Texas's main power grid - the portion managed by the Electric Reliability Council of Texas (ERCOT) - garnered $40 billion in revenue, according to his estimates.

"Somebody won big," McCullough said. "That's not all profit, but I suspect most of it will be."

ERCOT, which manages about 90% of the state's electric load, is facing a state investigation and two lawsuits arguing that its preparation, or lack thereof, for extreme cold left residents freezing and in the dark.

Texas Attorney General Ken Paxton, a Republican, said Friday that he was launching an investigation into how ERCOT and power companies had "grossly mishandled" the winter storm.

An ERCOT official defended the decision to trigger rolling outages, saying in a statement Saturday that it had been the "right choice to avoid a statewide blackout."

With Biden signing a major disaster declaration that will allow much of the state to tap vast reserves of federal aid, Rep. Michael McCaul, R-Texas, suggested that the federal assistance would be used to help those facing spiking power bills.

"The current plan is, with the federal assistance, to be able to help the homeowners both repair - because we have a lot of water leaks, a lot of water damage, pipes bursting - but, also, their electricity bills as well," McCaul said Sunday on CNN's "State of the Union."

He said federal assistance is "what Texas needs right now so desperately. A lot of people are hurting right now."

Turner agreed that consumers should not be saddled with the astronomical power bills.

"For these exorbitant costs, it's not the consumers who should assume that cost," he said on "Face the Nation." "They are not at fault for what happened this week. The bills should go to the state of Texas."

Griddy officials knew the storm would drive up prices, and the company sent an email to customers Feb. 14, warning them to find new providers. But when customers went shopping, the other companies were not offering plans.

One resident, Ty Williams, told local TV station WFAA that he saw the email from Griddy and tried to switch to a new company, but that no one would accept him as a new customer until Feb. 26.

Williams said that he normally pays $660 a month across three electric meters - home, guesthouse and office - but that his bill shot to more than $17,000 in the past week. "How in the world can anyone pay that?" Williams told the station. "I mean you go from a couple hundred dollars a month . . . there's absolutely no way . . . it makes no sense."

Gov. Greg Abbott, a Republican, said Saturday that he was convening an emergency meeting with state lawmakers to discuss the spikes, saying in a statement that "it is unacceptable for Texans who suffered through days in the freezing cold without electricity or heat to now be hit with skyrocketing energy costs."

"The catastrophic winter storm was expected to become the "largest insurance claim event in [Texas] history," said the Insurance Council of Texas, a trade group, which estimated that the damage would far outpace the $19 billion in claims from Hurricane Harvey in 2017.

The White House's disaster declaration followed similar state-of-emergency notices in Louisiana and Oklahoma, which will allow the general public and business owners to apply for temporary-housing grants, home-repair loans and other emergency aid.

It offers individual assistance to 77 of 254 counties, including the areas around Houston, Dallas and Austin, but does not cover the entire state.

Abbott said Saturday that the White House's "partial approval is an important first step." The White House and the Federal Emergency Management Agency said more counties could be covered as government officials continue assessing the damage. Michael Hart, a spokesperson for the agency, told The Post that major disaster declarations "routinely begin with an initial set of counties for which damage information is available."

Asked about the partial declaration on ABC News's "This Week," Psaki said the White House has been in "very close touch with Governor Abbott."

"What happens here is the governor requested a federal disaster declaration. The president asked his team to expedite that," she said. "And FEMA determined where the counties should be - where it should focus the immediate resources, where the counties that are hardest hit, so that they can make sure they get to the people in most need."