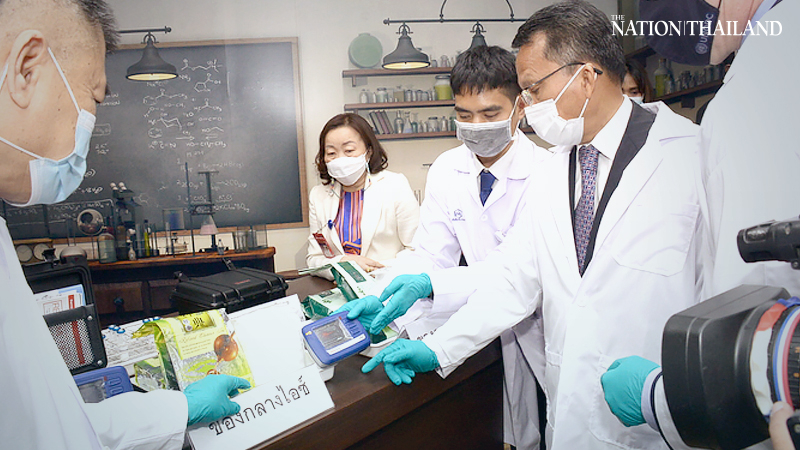 Thailand was armed with a powerful new weapon for its war on drugs on Wednesday, when Justice Minister Somsak Thepsutin took delivery of handheld narcotics analysers from the United Nations Office on Drugs and Crime (UNODC).

“The new portable analysers utilise the Raman spectroscopy technique to identify suspicious drugs and chemicals in less than 30 seconds, and more accurately than the colour test method that we currently use,” said Somsak.

The analysers will be used in drug prevention and suppression operations conducted by the Office of the Narcotics Control Board (ONCB).

“UNODC has handed two machines to the ONCB, which will help increase agents’ efficiency in detecting illegal drugs and chemicals smuggled cross the border via natural channels, or at the airports, seaports, and other routes,” added the justice minister.

ONCB secretary-general Wichai Chaimongkhol said the portable Raman spectroscopy analysers can detect the drugs as well as additives such as colouring and flavouring agents, which will make it easier to track down drug smugglers and manufacturers.

“The machine can detect chemicals either in powder, crystallised, tablet, capsule or liquid form,” said Wichai. “Furthermore, its laser can penetrate transparent containers or wrapping of up to 2mm thickness and read the scattering of light to identify the substance accurately, reducing the risk of officials handling harmful chemicals while also helping preserve the evidence.”

Jeremy Douglas, regional representative of UNODC’s Southeast Asia and Pacific Office, said the UN agency was glad to help Thailand in its campaign against drugs at both the national and regional level, and is looking forward to future cooperation on a larger scale.