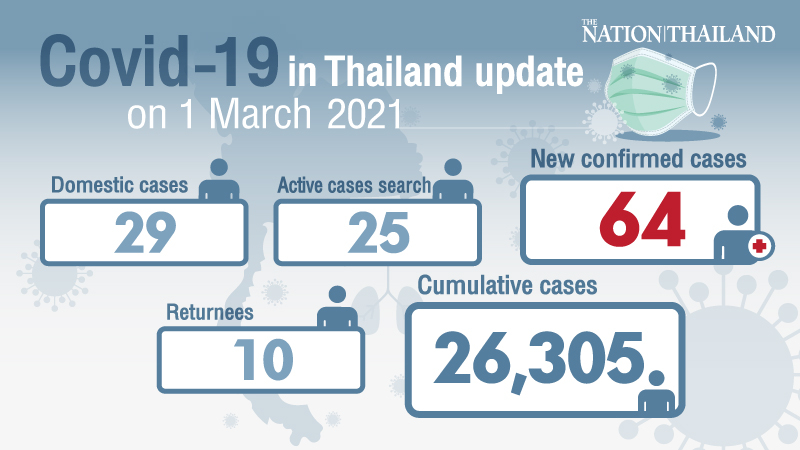 The Centre for Covid-19 Situation Administration (CCSA) on Saturday reported 64 new cases, 10 of whom were overseas travellers in quarantine facilities.

Of the 29 exposed to the disease while visiting high-risk areas, 24 were in Samut Sakhon, two each in Bangkok and Tak, and one in Nonthaburi.

Meanwhile, proactive testing led to the discovery of 25 cases, 17 in Samut Sakhon, four each in Pathum Thani and Bangkok.

Of the overseas travellers found to be infected in quarantine facilities, three Thais had returned from Croatia and the United Arab Emirates, a Malaysian had travelled from Indonesia, while a Bangladeshi, a Dutch, a Myanmar, a German, an American and a UAE national had come from their respective countries.

Meanwhile, 45 patients have recovered and been discharged.

As of Saturday, the number of confirmed cases in Thailand had risen to 26,305. Of these, 23,472 had been contracted locally, including 14,641 who were found via proactive testing, while 2,833 were returnees. So far, 25,686 have recovered and been discharged, 534 patients are still in hospitals and 85 have died.