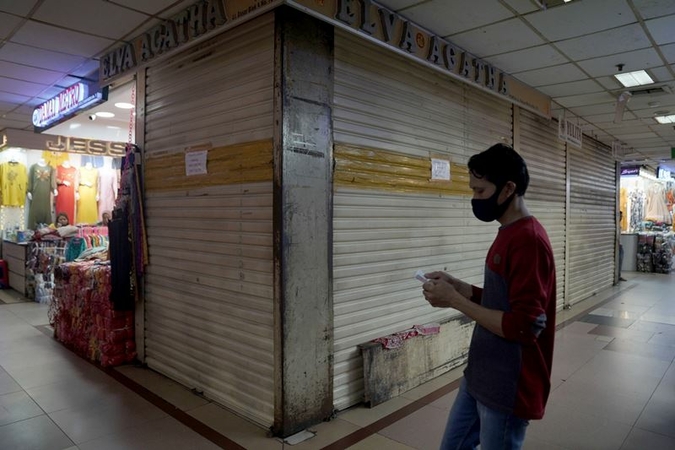 A closed store at Tanah Abang market in Jakarta in August 2020. MUST CREDIT: Bloomberg photo by Dimas Ardian

Countries across Asia are trying everything from fertility tours to baby bonuses to spur population growth in an aging world. Not so in Indonesia, where officials are trying to convince people to have fewer children.

The world's fourth most-populous country is promoting later marriages, family planning and contraception to lower its fertility rate to 2.1 children per woman by 2025. That's the "replacement rate" that would effectively flatten population growth in the country of 270 million, damping some concerns that overcrowding could mean fewer job opportunities and strains on government services.

Indonesia's latest push - a family planning campaign starting from late January - follows a decades-long struggle to bring the fertility rate down from 3 children per woman in the early 1990s. The difference now, National Population and Family Planning Agency Head Hasto Wardoyo says, is that instead of just slowing population growth, Indonesia is aiming to simultaneously improve other factors such as health, education and employment.

"In the past, the focus was on reducing the quantity of the population. Now it's more on improving the quality of the population," Wardoyo said. "The quality and productivity of human resources must be improved because we're currently in a demographic dividend period. If not utilized, the demographic bonus can actually become a burden for development, rather than development capital."

That might appear to be a risky venture for an emerging market, especially one that has lured investors with its youthful demographics and cheap labor. China famously has found it's a struggle to reset the habits of families who for decades were restricted to one child. And development economists generally advise that overpopulation tends to resolve itself as a country climbs the income ladder, making counter-efforts unnecessary.

Indonesia is saying it can't afford to wait, especially as it's bracing in the short term for potentially more pregnancies and less contraceptive use amid the pandemic's stay-at-home orders.

Like many of her friends and relatives, Yulia Purnamasari said she got pregnant right after getting married in 2018. But when she and her husband realized the time and money needed to raise a child, they delayed having another baby so they could save up for a few years.

"We think it's a plan that fits with our capacity with time, energy and money," the 29-year-old working mother said. "We want to be able to provide our children with our maximum attention, care and education."

Purnamasari said she didn't know about family planning or how to access counseling where she lives on Lombok island in eastern Indonesia. Luckily, a local midwife was able to give her advice on contraception and installed an intrauterine device.

But Purnamasari still sees herself as an exception.

"My sister, for example, doesn't do family planning and doesn't use contraceptives regularly," Purnamasari said. "If she gets pregnant out of plan, she just sees it as a blessing."

The government's campaign to make Purnamasari less of an exception, along with emphasizing a more digital-ready workforce, seems to be winning over analysts and investors.

The drive to develop human capital "aligns with broader strategies to move Indonesia up the industrial value chain in areas like electric vehicles and downstream processing, as well as accelerating growth in what is already Asean's largest digital economy," said Patrick Cooke, a managing editor of research firm Oxford Business Group, referring to a group of Southeast Asian nations. "On balance, I believe investors would be happier with rising prosperity and skill levels in Indonesia rather than an ever-rising population."

Given the size of Indonesia's population, even a modestly higher-than-average fertility rate can balloon the numbers. At its current pace of 2.3 children per woman, Indonesia will add 30 million people in the next decade - an increment that dwarfs the total population of Australia, United Nations projections show.

The new population strategy would be a fundamental reworking of the growth model that has Indonesia on course to be one of the world's five largest economies by 2030, overtaking the likes of Germany, Japan, Russia and Brazil, according to Standard Chartered projections from 2019 using purchasing power parity exchange rates and nominal GDP. The country has long banked on its huge domestic market for consumption, while its abundant cheap labor has propped up sectors like manufacturing, mining and agriculture.

In Thailand, the government has embarked on a long-term campaign to avoid being a rare economy that grows old before it grows rich. The central bank has warned repeatedly that Thailand could be the first developing country to become an "aged society" by next year, and is pushing to raise the retirement age, support reverse mortgages for the elderly and give employers incentives to hire workers older than 60.

Singapore has offered to increase cash support for citizens who have kids amid reports that many could delay parenthood due to job losses and wage cuts during the pandemic. The number of marriages in the city-state fell about 10% last year.

"To secure our future, we must make our own babies, enough of them," Singaporean Prime Minister Lee Hsien Loong said in 2019.

As Indonesia embarks on the opposite course and seeks to change attitudes, it also faces the challenge of adapting to a higher-income economy.

Despite graduating to upper-middle income status last year, Indonesia lags countries in the Organisation for Economic Cooperation and Development - a group of richer nations, where it's a "key partner" rather than a member - across a range of development indicators like health care spending, youth employment, tertiary educational attainment and life expectancy.

The pandemic has aggravated the situation, especially as Indonesia battles Southeast Asia's worst coronavirus outbreak. The OECD warns of "severe" social fallout even if the economy returns to growth, as shrinking job opportunities threaten to swell the ranks of the poor to 36 million.

"Even without a pandemic, Indonesia's job market is already quite tight with around 2.5 million new entrants to the workforce each year," said Turro Wongkaren, director at the University of Indonesia's Institute of Demography. If the government can't keep people healthy, educated and employed, its "demographic bonus" can just as easily become a "demographic disaster," he said.

Bringing down the fertility rate is a long and gradual process, according to Satyawanti Mashudi, a commissioner with the National Commission on Violence Against Women. It took the country more than two decades to lower the fertility rate from around 3 children per woman in 1991 to 2.4 in 2017, she said.

"As populations get wealthier they tend to have less kids, as they don't rely on them when they are older and it becomes more expensive for education and other needs," said Joshua Crabb, a senior money manager at Robeco in Hong Kong. "This is indicative of a growing middle class and a focus on the quality of life. Either way, it will be many years before that would impact the demographics of Indonesia, which is still very young."

There are also deeply ingrained cultural and religious values at play. The predominantly Muslim nation has tight-knit extended families, and having more children is considered to bring more blessings from God, Mashudi said. Even when women are open to contraception, their husbands and relatives may not be supportive, she said.

The government also will have to confront a more-is-more mindset among Indonesian families, especially those in the provinces that still consider children as potential human capital for their businesses, Mashudi said.

"I once talked to a person in Kalimantan island about family planning and they said, 'Why should I have fewer children? My family still has this large plot of land, so why should we have a small family?'"

Some say Indonesia may not have to do much at all. Fertility rates are falling across the world, although the pace is slower in Indonesia.

Indonesia would do well to prepare for the shift and invest in improving the productivity and innovation of its human capital, especially amid its "gaping shortage" of technical and professional skills, Park said.

Years of inadequate investment in education have led to a deficit of 1.3 million high-skilled workers in 2020, OECD data showed. The gap is estimated to grow to 3.8 million by 2030, equivalent to one-third of the high-skilled workforce.

ADB's Park said Indonesia eventually will need to shift away from a growth paradigm of low-wage employment toward one geared for a higher-value knowledge economy.