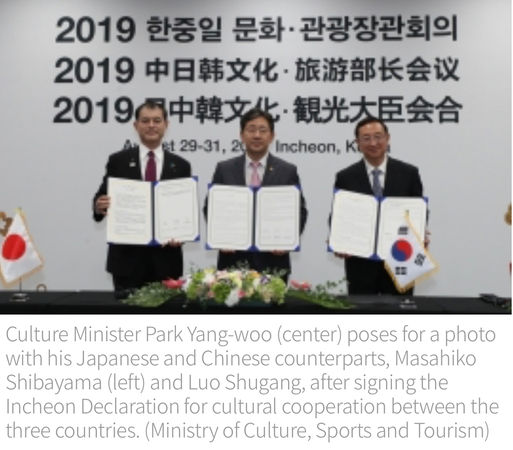 Despite diplomatic and trade tension between Korea and Japan, the two countries, along with China, laid the groundwork Friday for cultural cooperation over the next 10 years.

Culture Minister Park Yang-woo and his counterparts Masahiko Shibayama and Luo Shugang signed the Incheon Declaration containing the 10-year vision during the 11th annual meeting of cultural ministers of the three countries in Incheon.

The declaration stated that the conference -- first held in China in 2007 -- has contributed to promoting cultural diversity of each country based on mutual trust, respect and benefits. It vowed to push ahead with new ways to cooperate in the cultural sector, particularly youth exchanges and issues like climate change and aging societies.

The three countries also vowed to push for joint cultural programs on the sidelines of international sporting event -- as they did at the 2018 PyeongChang Winter Olympics -- particularly for the 2020 Tokyo Summer Games and 2022 Beijing Winter Games.

In addition, they agreed to cooperate for the protection of cultural heritage, the development of content that fuses tourism and culture, and the protection of copyrights.“I sincerely hope that the three nations -- through cultural cooperation -- can jointly respond to various issues and challenges, raising our capacity to accept other cultures, which will ultimately lead to joint prosperity of the three cultures, along with peace and co-existence of East Asian community,” Park said during his opening speech.

The meeting came as Seoul and Tokyo are locked in a diplomatic and trade row, which has led to their worst relations in years.

Japan has also removed Korea from its whitelist of trusted trade partners. The souring relationship has even led to a nationwide boycott of Japanese products and tourism. Tourism ministers of the three countries -- Park, Luo and Keiichi Ishii from Japan -- held a separate meeting later in the day, and adopted a joint statementvowing joint efforts for peace, stability and prosperity in the East Asian region.

The three ministers also agreed to create an environment for "Tourism for All," and cooperate for sustainable growth of tourism industry.