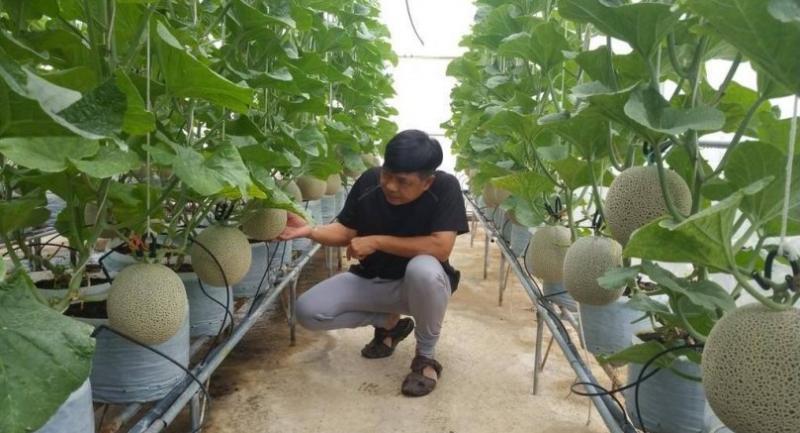 Politician-turned-reformer Alongkorn Ponlaboot has turned to be a melon farmer as he fades away from politics. (Photo Courtesy of Alongkorn's Twitter)

DESPITE BAN ON POLITICAL GATHERINGS, MANY HAVE KEPT THEMSELVES OCCUPIED

ALMOST four years ago, the coup removed politicians from formal politics and banned them from any activism. But that does not mean all politicos have been taking a break in these past years.

Despite the very strict ban on political gatherings, some politicians have been keeping their nose to the grindstone. They may seem to be off the political grid, but actually, they still get out and about, and network with voters through different activities. So, although they have been away from the Parliament and the public stage for quite a while, they are all geared up and ready to get back into the political arena once the ban is lifted.

As the junta continues to run the country and hold a tight grip on political activism, a number of politicians have thrown themselves into the sports industry as it is a smart way to not only rake it in but also to build political currency.

MP-turned-football-club-president Warawut Silpa-archa is among those who have taken this path. Although his name has only come into prominence in the past few years as the president of Suphanburi Football Club (FC), Warawut told The Nation that he had been working with the club for almost seven years.

“My family, we have always been into sports. We have always seen value in them,” said the Chart Thai Pattana Party’s leading figure, whose wife and daughter are prominent in national professional ice-skating circles. “And similar to politics, I think that sports are also something that make people happy.”

“Through football, the club provides some social services to people. We bring happiness to the people in Suphanburi and give them a good time,” he said. “And by developing sport, we give some value to the people. This is nothing different from politics.”

Aside from that, Warawut said that he has been working at the charitable Banharn-Jamsai Foundation. So, in the past three years he has maintained close ties with people in his stronghold of Suphanburi. When the political ban is revoked, he is more than ready to jump back in politics, the ex-MP said.

Tankhun Jitissara is a former Democrat MP who, before the coup, managed to win in the Don Muang constituency – a onetime stronghold of the archrival Pheu Thai Party. He also said he was 100 per cent ready to get back to work as soon as the junta allows political gatherings.

In the past three years under the strict coup-backed regime, Tankhun said he had taken the opportunity to continue his studies.

“I’ve been doing a PhD on social leadership at the College of Social Innovation, Rangsit University since 2015. I’m trying to finish my thesis now and, hopefully, at the next election I will be running as a candidate who has a doctorate degree,” Tankhun said. Before embarking on the doctorate, soon after the coup in 2014, the former MP took some courses with King Prajadhipok Institute, an institution reputable for studies in political science.

“This is not to waste time, you know. I knew I would be free for quite some time so I would just go for it. I believe education can enhance my political work when civilian rule resumes,” he said.

Aside from this pursuit of knowledge, Tankhun said he had also tried to be as helpful as possible to the people in his former constituency. He said he has tried to be “the people’s man” and he listens to his former constituents about the problems they have. When party meetings are allowed once again, he will be ready to contribute and help people out at a higher level.

Many politicians from the former coalition-leading Pheu Thai Party have remained the focus of media and public attention regardless of the current regime.

Before she fled the country, former prime minister Yingluck Shinawatra made many Facebook posts indicating that she had been on a national tour, making merit and meeting supporters across the country.

She was always well received by her supporters during those tours and other activities. One time last year during the rice-price crisis, Yingluck bought tonnes of rice from farmers and managed to sell it all in just an hour.

If it had not been for the rice-pledging case, which led to her flight from Thailand, Yingluck would have been more than ready to get back to work after the junta steps down.

But there are some former politicians who seem to have turned their backs on the political life.

Suranand Vejjajiva, former secretary-general to ex-PM Yingluck, after the coup took on a business venture and started running his own restaurant, Brainwake Cafe, in Sukhumvit. After just a couple of years, Suranand has three other branches plus a food truck under the Brainwake banner.

He has only once posted a very political message on his Facebook page, when his close friend and former commerce minister Boonsong Teriyapirom was found guilty in the fake government-to-government rice deals case and handed a 42-year jail term.

Alongkorn Ponlaboot, former Democrat Party deputy leader, is another prominent politician who has said he would take a break from politics.

As he played a major role as vice-president of the now defunct National Reform Council and the National Reform Steering Assembly under the coup-installed regime, he pledged to put his political ambitions to one side in the national interest.

Alongkorn has said he would rather focus on realising reform than going back to politics.

Now that he is ineligible to run in an election – because he did not resign from the reform assembly within 90 days of promulgation of the new charter – the onetime commerce minister told The Nation that he still had a melon farm in his hometown of Petchaburi that he has to take care of.