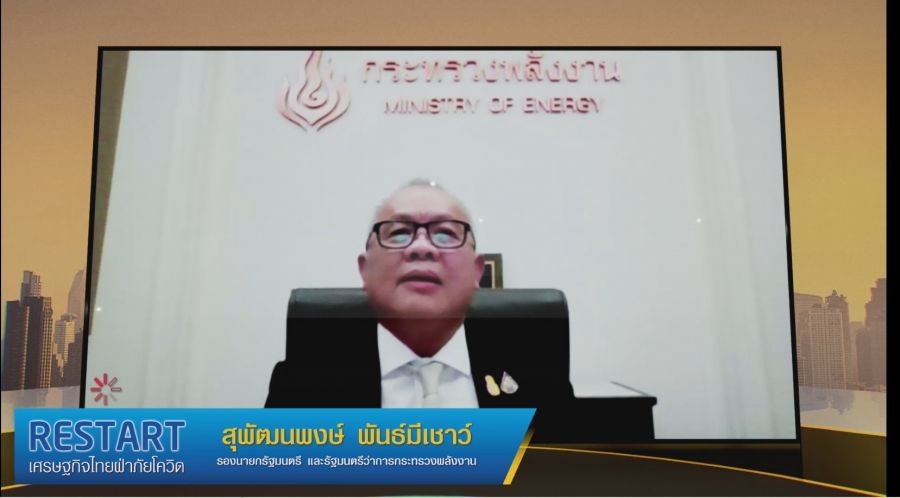 The government’s plans to rehabilitate the economy were revealed on Thursday at the online seminar, “Restarting Thailand’s Economy to Overcome Covid-19 Crisis”.

The forum was organised by Krungthep Turakij newspaper and the Electricity Generating Authority of Thailand (Egat).

In his speech, the energy minister said the government is formulating an economic rehabilitation plan, called “4-D Strategies”, which will be implemented once the Covid-19 situation improves. The strategies are:

• Digitalisation: The government will promote the building of digital infrastructure, reduce obstacles for foreign investors to establish data centres and other digital factories in Thailand, as well as build a skilled workforce to cope with expansion in the digital industry. This industry is expected to boost the country’s GDP by 0.7-0.8 per cent.

• Decarbonisation: The government will promote industries that reduce the emission of carbon and other pollutants as well as promote the use of electric vehicles to reduce reliance on fossil fuel. The aim is also to have Thailand producing electric vehicles at 50 per cent of its total manufacturing capacity by 2030.

• Decentralisation: The government will help expand key industries and related smaller sectors to attract investment from various sources. For instance, the electronics industry could branch into smart electronics.

• D-Risk: This measure aims to reduce the risk of buying property in Thailand to attract foreign buyers, especially people with high net worth, retirees, expatriates working in Thailand and tourists who plan on long stays.

Meanwhile, TAT governor Yutthasak said his agency was confident that the reopening of tourist destinations under the sandbox scheme will attract many inoculated foreign tourists and revive the tourism industry.

“Since the Phuket Sandbox scheme started on July 1, only 10 out of 5,742 arrivals were infected, which is a good start,” he said. “A similar campaign will be implemented in some islands of Surat Thani, Krabi and Phang Nga. In September, this scheme will expand to other cities, including Pattaya, Chiang Mai and Buri Ram.”

FTI president Suphan said the 14-day lockdown of 10 provinces, including Bangkok, since July 12 will affect many industries especially those relying on manual labour.

“The government must speed up Covid-19 testing in all groups of labour to prevent cluster cases from emerging, as well as provide vaccination to workers across all industries as fast as possible,” he added. “Currently there are social security beneficiaries who have still not got their jabs because the Social Security Office has not been allocated enough doses.

“The most important thing is to restore the country’s public health to its full capacity by achieving vaccination targets to reduce new infections. Only then can all businesses reopen with confidence and fully restart the country’s economy,” he added.